Sign petition to demand review of CRD sewage plan
The communities have created a petition that we are sponsoring:http://sewagepetition.ca/Every signature will be presented in the Legislature by local MLAs.
--------------------------

Please review it to generate idea for speeches.
http://www.esquimalt.ca/news/news02191401.aspx

Two important short documents from Colwood that will be critical for the next month:

1. Sewage Treatment and Resource Recovery in Colwood
2. Colwood Notice of Motion for the March 12, 2014 meeting of the Core Area Liquid Waste Management Committee.

How it went - RITE Plan at Vic West Community Association 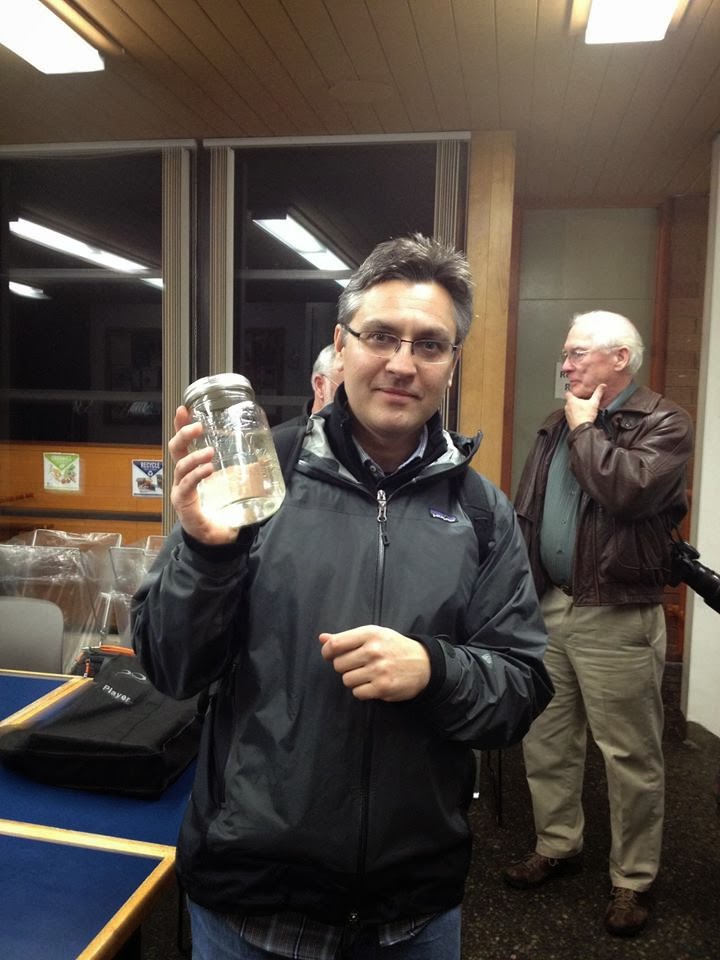 Richard with the "RITE" type of mason jars..

Mayor of View Royal and CRD Director Graham Hill was on CFAX at 2:30pm today talking about the state of the sewage treatment project:

Mayor Hill has a very frank discussion with the host.

Derman on CFAX: Fail to plan and plan to fail...Vic Derman was on CFAX this afternoon to talk about the latest CRD debacle: kitchen scraps mismanagement:http://theriteplan.ca/media/140226_CFAX_Vic_Derman.m4aIt's fairly evident that CRD should not be in the waste management business. Their solution for everything is to write a giant cheque.

Atwell on CFAX: Lack of cost controls at "SeaRD"

I was interviewed on CFAX today to talk about the apparent lack of cost controls at the SeaRD:

Frequently updated with the most vital and interesting snippets that show the best and the worst of the CRD's sewage planning process
http://www.youtube.com/user/theriteplan

Here's what happened at the CRD Commission meeting, Part 1:

Retired wastewater engineer David Langley came to tell the CRD Commission that their governing bylaw (3851) requires them to have Consultation Plans.

What followed was an exercise in "mexican hat dancing" saying anything and everything short of admitting they should have one even for the teeny weeny task of asking unsuspecting property owners if they'd like a sewage pumping station on their land.

In the past the CRD has avoided this "problem" by gagging the landowner and paying for an easement onto the property in advance "for future use" which isn't disclosed to the next owner of the property.

So whatever they are considering and calling consultation is really up to the imagination...

Maler on sewage superbugs and plasmids

Tom Maler, Ph.D gave a presentation at the McLoughlin public hearing on superbugs and plasmids:

Moves by Esquimalt and Colwood around the sewage treatment plan will make March a great month for political theatre.

Last month I told you about a forum at which Oak Bay-Gordon Head MLA Andrew Weaver and others urged the CRD to at least ask for an extension of the time frame demanded by upper levels of government to finalize the region’s sewage treatment plans. Unfortunately, while a motion to that effect had been made by Victoria City councillor and CRD director Marianne Alto, it was voted down by the majority of the CRD board in mid February.

Not a good sign. That vote will just add to the growing cynicism and distrust of local residents. The CRD seems intent on damaging its own credibility. Some sort of demonstration by the board that it is hearing the dismay and discord it has generated is needed—a sign that it is open to modifying its plans in light of new information, reason, and community concern.

No pride in sewage plan (Burchill)

In reply to Albert Sweetnam’s letter, let’s first welcome Mr. and Mrs. Sweetnam to Victoria with the greeting of Mahone Bay, N.S.: “We love the beauty around us and we welcome you to share it.”

We welcome them to share in our pride that Victoria has often been awarded the distinction of being one of the most desirable cities in which to live, and is a major tourist destination. Some reasons are temperate climate, stunning mountain views and an ocean waterfront that is frequently referred to as pristine.

National Geographic divers who surveyed for the Race Rocks Marine Ecological Reserve declared our waters to be among the most pristine they had experienced in all of North America. Distinctions which, of course, would not be possible if Victoria had a sewage problem.

Sweetnam is very mistaken to think that tearing up our neighbourhoods and erecting the embarrassment of a sewage plant at the entrance to our harbour will somehow make us proud. Our existing lower net-environmental impact system that utilizes the free energy of ocean currents to safely treat our sewage is world-class and deserving of our pride.

Re: “Decision on disposal of food scraps delayed,” Feb. 27.

It is encouraging to see that some Capital Regional District directors want more information such as “analysis of net greenhouse gas emissions” before making a decision to either landfill the food scraps locally or ship them to Richmond for processing.

Good plan! Let’s not destroy the environment in our attempts to save it. I have to wonder what the answer would be if the same logic were applied to the current Seaterra project for sewage treatment.

In 2006, the CRD Core Area Liquid Waste Management Committee was created, leading to the current $783-million sewage project. Colwood, one of the seven participating municipalities, has threatened to withdraw from the project, and without any contracts for a sewage treatment site or a biosolids and incinerator site, actual costs remain unknown. Unfortunately, with these and other already incurred legal and contractual costs, the currently envisaged project risks being cancelled or postponed, with the attendant project director’s estimate for increased management and inflationary costs of $900,000 a month.

Adding to the CRD’s unfolding sewage debacle is the CRD’s kitchen scraps strategy. The “Feed the land, not the landfill” plan to produce biogas or compost was another costly project started before binding contracts with primary services were confirmed. Residents and the CRD itself have already spent money on a program that, without a local processing site, will now likely cost an additional $5 million for a 20-month processing solution in the Lower Mainland. Hopefully, we’ll not incur a carbon tax for shipping all that waste.

There is little doubt the CRD can, and has (perhaps too late?) hired experienced professional project managers. Risking oversimplification of complex issues, it appears the CRD must improve the front-end strategic planning and confirmation necessary before proceeding with a separate and subsequent project-management process.

Only Desjardins is speaking up (Neate)

High praise to Esquimalt Mayor Barb Desjardins, who seemingly is the only elected official to speak up or make a discernible effort to give the public an opportunity to become informed of the pertinent aspects of the Capital Regional District’s sewage imbroglio.

Esquimalt not to blame for sewage-project costs (Pittman)

The Capital Regional District makes up numbers to scare the public into fearing that somehow the proper public consultation process is costing us money, when in fact it is the CRD’s bungling that is wasting money.

And that is just the tip of their iceberg; many costs are not accounted for in their estimates or shuffled to other budgets to obscure the reality. They forgot to budget for an end process for the sludge so that increases the cost by about $38 million if they need an incinerator.

The blame for delays and cost overruns rests squarely on the designers of this plan and not on Esquimalt council, which is following good public process and policy.

And don’t forget, Esquimalt might not pass the zoning. After all, we are talking about Esquimalt’s last and only parcel of municipal oceanfront property that can be developed.