How it went - Esquimalt hearings

The public hearings on the rezoning of McLoughlin Pt have now concluded.Days: 4Hours: 13Speeches: 115Number in favour of the bylaw: 1Cost to the taxpayer to have Jack Hull sit through it all: $1371.50.Sweetnam's expression: priceless.Graham Hill delivered a short but heartfelt speech about the public process among other things. He's a class act.Mark your calendars for the big day: April 7th at Esquimalt Council at 7pm. 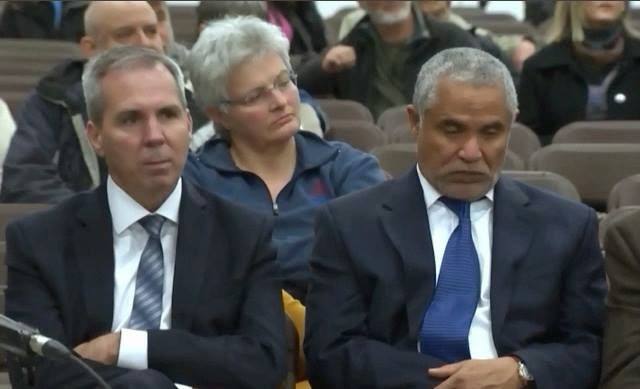 In the field of project management, a new paradigm has gained considerable traction over the past two decades. It’s one that allows for quite a different way of thinking.

Traditional project management is based on several assumptions. That you plan once when the project is launched, and any changes should be rare. That the primary goal is to complete on time and on budget as initially planned. That project control is solely about identifying deviations from The Plan and getting back on track. The result is a rigid approach, fixated on executing the project exactly as it was initially planned, and largely decoupled from changes in the project environment.

Albert Sweetnam, Seaterra’s program director, recommends that we should be and are going to get on with the wastewater treatment program (“It’s time to move on with Seaterra program,” Feb. 15).

We have been hearing this for more than five years since I wrote “No to sewage plant at McLoughlin Point,” published in the Times Colonist Dec. 11, 2009, which argued that McLoughlin Point was not a good location for the plant.

Interesting that after my article appeared, the Capital Regional District chairman and others on the CRD board wrote articles stating that enough work had been done to enable the McLoughlin site to be used for the wastewater treatment plant.

The CRD sponsored a number of large, expensive ads in the fall of 2010, titled “All Things Considered,” explaining that the search for a wastewater-treatment plant site led to reclamation of the former oil-storage site at McLoughlin Point, resulting in a more cost-effective, environmentally and socially responsible wastewater treatment system. The ads notified the public of all the work that had been done, including advising that the region was committed to an architecturally pleasing facility and that it would continue to refine the system, including trying to find a closer location to McLoughlin Point for the biosolids facility, which could reduce costs further.

There is a strong case for elimination of the pumping of biosolids, the pipeline to the landfill site, the planned external biosolids treatment plant and the operating costs. This would save millions of dollars in capital costs and some operating costs.

The McLoughlin site needs to be enlarged if the region is going to develop this site. Such expansion of the site would allow the elimination of pumping of biosolids and construction of an expensive pipeline and the biosolids plant at the landfill.

I have been advised by the person previously responsible for the treatment program that the reason the treatment plant was placed at the McLoughlin Point site was because it was the only site for sale on the water. They also advised that they did discuss with the Department of National Defence the need for additional lands, but were not successful in acquiring lands from the DND for expansion of the site.

In my view, not all has been done to acquire additional lands from DND to save millions of dollars. The premier should be requested to intervene with the prime minister on behalf of the region to present the case to acquire adequate DND lands to satisfy the site requirements for the treatment plant and the biosolids process in order to eliminate the pipeline and the processing plant at the landfill.

In addition, I strongly recommend that discussions should commence among the region, the premier and the prime minister before any more work is done on the project. If negotiations are not successful, the treatment plant should be relocated to another appropriate site to satisfy all of the above requirements.

Because of the size of this project and the extensive time and money already spent, a comprehensive review should be made to specifically reduce costs and to lessen the impact on taxpayers.

- Donald Roughley, P.Eng., is a former Victoria city manager, a position he also held in Waterloo and Scarborough, Ont.

The third act in the continuing drama of whether to allow a sewage treatment plant at McLoughlin Point begins tonight as Esquimalt resumes its public hearing into the requested rezoning.

Two evenings of public hearings last month into the application by the Capital Regional District left some people still wanting to speak, and Esquimalt scheduled another session tonight at the Archie Browning Sports Centre. A hearing will be held Saturday afternoon if needed.

Mayor Barb Desjardins says she has no idea how many people will want to speak or whether the Saturday session will be required.

“From what I’ve heard and seen on Facebook … people are interested and are coming, but you never really know until they show up,” she said.

Desjardins has been criticized by some for not keeping a close enough eye on the clock when people are speaking and allowing presenters to stray off topic. She makes no apologies. “There really are no time limits on public hearing speakers. The fact of the matter is the CRD came forward for a rezoning, so people can speak to everything that that encompasses,” she said.

The CRD has been seeking to locate a $230-million sewage treatment plant at the site of a former oil tank farm at McLoughlin Point for more than a year.

The site is zoned to allow wastewater treatment, but the CRD is seeking encroachments — a maximum of four per cent — into a 7.5-metre shoreline buffer and to increase the allowable height. The CRD first submitted a rezoning application to Esquimalt in January 2013.

Following public hearings in July, the municipality passed an alternative rezoning bylaw and began working with CRD staff to develop an amenity package to compensate for hosting the unpopular sewage plant.

As a result of the negotiations, Esquimalt is now being offered about $13 million in amenities should the siting at McLoughlin Point be approved, including oceanfront walkways, a milliondollar bike and path system on Lyall Street, public art, bike lanes, road improvements and $55,000 a year for at least five years.

Esquimalt held a two-evening public hearing on Feb. 18 and 19, but still had people wanting to speak at the end of the second hearing. Esquimalt also submitted a long list of questions to the CRD it wanted answered, which Desjardins said arose because of questions the public had raised.

The list covered many issues, including provision of a thirdparty review of the planned sixmetre-high tsunami wall, information on super bugs in secondary treatment plants and a third-party assessment of the impact of Colwood building its own treatment plant.

The CRD has responded and Desjardins said she has asked for a summary to be given at the start of the hearing tonight.

“I think there’s still some questions but, for the most part, they’ve done an excellent start in providing information back in a timely manner,” she said.
- GVPL PressReader, no url.

The final episode of Esquimalt’s long-running public hearing into whether sewage treatment belongs at McLoughlin Point began in unusual fashion Saturday, as a fire alarm disrupted the proceedings, sending the crowd of 90 out of the Archie Browning Sports Centre.

The hearing began after a brief delay and continued for about four hours as people spoke on rezoning McLoughlin Point to allow a $230-million sewage treatment plant on the site.

Susan Woods didn’t pull any punches Saturday in her assessment of the structure that would house the treatment facility, calling it “a giant lump of a building complex.”

Esquimalt resident Roger Wheelock described the project as having “a San Quentin prison wall.” He said his objections had nothing to do with a NIMBY — Not in My Backyard — attitude.

“It’s Not in All of Our Front Yards,” he quipped.

Denying the rezoning is the choice to make, he told councillors, but “some newer generation will bless you for it.”

The Capital Regional District has been seeking to locate the plant at the site of a former oil tank farm at McLoughlin Point for more than a year as part of a $783-million regional sewage project. The site is zoned to allow wastewater treatment, but the CRD is seeking encroachments — a maximum of four per cent — into a 7.5-metre shoreline buffer and to increase the allowable height. The CRD first submitted a rezoning application to Esquimalt in January 2013.

Amenities worth more than $13 million have been offered to Esquimalt if the siting of the plant receives approval, including a bike and path system on Lyall Street, public art, oceanfront walkways and $55,000 a year for five years.

Despite that, members of the public have urged Esquimalt council to turn down the rezoning, saying the McLoughlin Point parcel is too small and criticizing the idea of having a sewage plant at such a prominent spot next to Victoria’s harbour.

Saturday’s gathering was the final session of a public hearing that began Feb. 18-19. Since all the people wanting to speak couldn’t be accommodated during the February dates, a third session was held Thursday, followed by Saturday’s wrap-up.

Esquimalt council is scheduled to make its decision on the rezoning on April 7.

Sewage system should be decentralized (Burton-Krahn)

Re: “McLoughlin Point too small for sewage plant,” March 19.

Donald Roughley hit the nail on the head when he wrote about the lack of cost control and the escalating costs associated with the current sewage plan.

I disagree, however, that siting this plant on Department of National Defence lands would solve all of our problems. The primary siting requirement for a massive, centralized system should be how large the buffer is between the site and human beings.

It should be one kilometre minimum, given the toxic, industrial nature of the operation. This would rule out DND lands. The existing outfalls should not be the primary criteria for building this boondoggle.

The problem from the beginning is that the location of live human beings has never factored into the decision-making. The existing location of the outfalls has guided this misguided project from Day 1.

Colwood’s desire to leave the current plan and set up its own system with a higher level of treatment is the way of the future.