"The issue of a new sewage treatment plant for the Greater Victoria area is a big one with the CRD and Esquimalt unable to reach any kind of agreement on a potential site. NDP MLA for Esquimalt-Royal Roads Maria Karagianis told CFAX 1070's Frank Stanford the province needs to step in.

"I do think it's unfair for the province to say 'here's a bunch of criteria you have to meet and we're not going to help you meet that criteria, despite the fact that we can see that you've had some problems trying to come to a conclusion on this.'"

Karagianis says the provincial government would have an easier time getting the project built because it has more site options."
-------------

Earlier today, Mayor of Colwood Carol Hamilton and Mayor of Sechelt John Henderson were in the CFAX studios with Terry Moore describing the innovative Sechelt facility and Colwood's process to seek similar expertise to determine how they can achieve the best result for their taxpayers:

Listen to caller Jack at the end of the show (31m50s) explain his frustration with the CRD then listen the Carol Hamilton's reply:

"A lot of what we're dealing with always comes to the table with deadlines and timelines strapped and wrapped around it, so decisions have to be made now...if you don't do this it's going to cause "that" problem.

Report writing of what I call outcome written so that they lead to a decision making process that is ultimately..."

I can hardly think of a CRD meeting that hasn't been this way. Staff make the decisions for the directors some of whom (ahem Judy Brownoff on more than just a few occasions) work incredibly hard to justify the staff decisions instead of scrutinizing them.

Sechelt facts from the show:

Cost: $376/yr is the cost for treatment with the current worn out plant secondary treatment plant. The cost per door for a brand new odour and noise free tertiary plant with homes on three sides is the same price.

The reclaimed water will be used by golf courses, district parks and agriculture.

Bateman of CTF on CFAX 17 July

Jordan Bateman of the Canadian Taxpayers Federation (CTF) was on CFAX 1070 with Bruce Williams to talk about their updated report on the sewage costs:

The CTF reports that any "savings" for Esquimalt to take an $18.9m bribe results in a subsidy which will need to be paid for by every other municipality.

In other words, if you don't live in Esquimalt but still within the core area, your bill would be going up and you don't get a vote in that and CRD won't be sending you a flyer telling you your bill will be going up because the municipal wastewater regulator don't require it.

If Esquimalt did take the bribe, it would have to spend $8.6m of it on barging costs. So much for "free".

Horgan says the NDP...the party of virtually all of the capital region's MLA's...is going to play an active role...

“We’re going to be putting together a committee next week…an internal committee that’s going to try and wrestle with this…but my big concern about the provincial government is that they mandated this activity, and now they’re stepping away and saying ‘well you should figure it out yourself’”

Horgan told Bruce Williams on C-FAX today that his committee will try to bring together the province; the CRD; and the seven affected municipalities.
http://www.cfax1070.com/News/Top-Stories/Local-Opposition-MLA-s-will-try-to-break-sewage-tr
---------------
CRD sends letter to province
http://theriteplan.ca/docs/140715_MOEandMCSCDRequestingProvincialTakeoveroftheSeaterraProgram.pdf
---------------
CFAX POLL: NDP INVOLVEMENT? 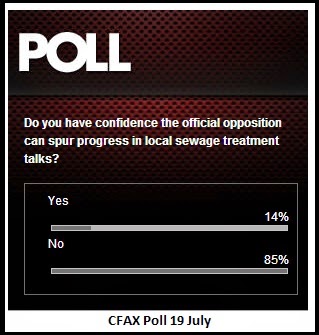 Province should give CRD power to act (Chapman)
http://www.timescolonist.com/opinion/letters/province-should-give-crd-power-to-act-1.1207530

Reward politicians who do the right thing (Love)
http://www.timescolonist.com/opinion/letters/reward-politicians-who-do-the-right-thing-1.1207525

SEND IN YOUR LETTERS!
- CLICK HERE TO SEND LETTER TO TIMES COLONIST
- Click here to send letters to VICTORIA NEWS