ARESST chair not giving up after electoral rejection

The chair of ARESST says the group's lobby against land-based sewage treatment has not ended with his failure to be elected mayor of View Royal on Saturday.

The man who was elected Mayor, David Screech, has said the outcome was a signal that the public has decided the debate over the need for sewage treatment is over..;.but Brian Burchill says he "does not interpret it that way"...

"The ARESST board is going to be meeting shortly to look at future actions.  This project is so unnecessary; so rife with error that we are going to keep finding a way to get this corrected"

Burchill says the federal government needs to be persuaded that the currents in Juan de Fuca Strait make it a "low-risk" environment for sewage disposal, and there is therefore no need to be rushing into a land based solution.

Good job on the table showing how City of Victoria reps at CRD Board were voting on CRD sewage issues 2012-2014. Unfortunately, the public still doesn’t know which CRD reps voted secretly in March 2013 for plunking a risky sewage sludge plant in the middle of an Esquimalt Vic West neighbourhood at Viewfield.

As important as votes made at Council meetings are those made by the City of Victoria’s representatives, or their alternates, on the Capital Regional District Board – Marianne Alto, Dean Fortin, Ben Isitt, and Geoff Young. As we didn’t have resources to review all the Board votes, we focused on those associated with the most significant CRD issue addressed in the past term, wastewater treatment within the CRD’s Core Area Liquid Waste Management Committee (CALWC) . 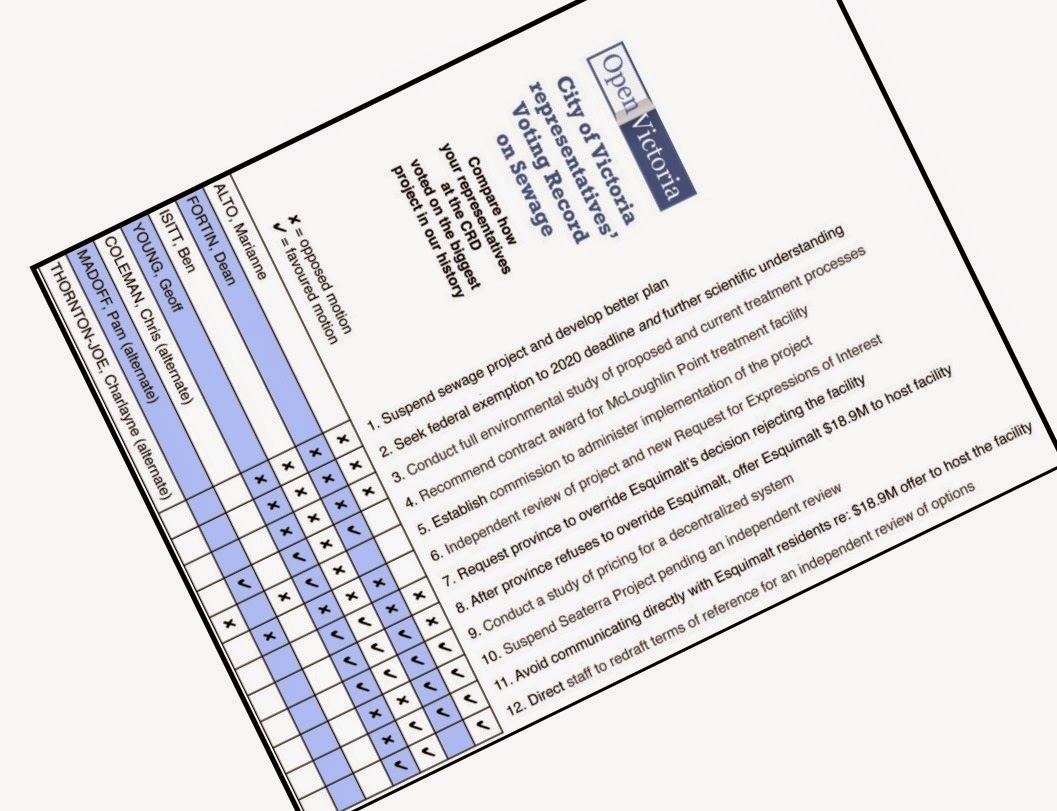 Sewage treatment remains a top issue for voters. Desjardins has been the face of Esquimalt as it battled to keep a new treatment plant from being built at McLoughlin Point.
http://www.timescolonist.com/esquimalt-barb-desjardins-cruises-to-re-election-as-mayor-1.1588044
-
Frank Leonard, Saanich mayor for 18 years, was defeated by sewage-treatment activist Richard Atwell. Atwell, running on the theme “it’s time for a change,” hammered away at Leonard’s attendance record at the Capital Regional District sewage committee meetings throughout the campaign, saying Leonard had missed 102 meetings.
http://www.timescolonist.com/news/new-mayors-helps-wins-in-victoria-atwell-takes-saanich-1.1588494
-----------
LETTERS:
Politicians shouldn’t be trusted on large projects (St. Gelais)

The Johnson Street bridge replacement is coming in over budget. The sewage treatment program is estimated to cost about 10 times as much, with many more unknowns potentially adding to the price, so any shortfalls will be higher and borne by local taxpayers. Additionally, the risks associated with building and maintaining a sewage pipeline are substantial.

We now hear that the neighbours of the Saanich composting facility are complaining about the noise and smell. When the sewage is pumped to Saanich to be processed, will it, too, cause similar complaints? If Saanich didn’t anticipate the problems caused by composting, what confidence should we have that the Capital Regional District will do any better with sewage?

The common thread in the bridge replacement and the sewage treatment program may be politicians who underestimate the scope and negative effects of such mega-projects. The bridge replacement needed to occur. On the other hand, most of the science says that additional sewage treatment isn’t necessary. Victoria has a unique geography that allows for marine-based disposal that is superior to what can be accomplished on land.

We should be asking municipal politicians whether they are willing to challenge federal and provincial politicians who have mandated this irresponsible project. Continuing on our current path will be devastating to our region.

Jack Hull makes a very good point about bringing truth to the sewage treatment debate. Unfortunately he fails to follow his own advice in much of his commentary, spinning out tired clichés and half-truths.

His statement that “multiple plants cost more than a single plant” does not state there are significant capital and operating costs for the additional pipelines and pump stations necessary to convey all the sewage to a single plant.

His statement that “costs of tertiary treatment are greater than for secondary treatment” fails to mention that the quality of the effluent from a tertiary plant is far superior to that for a secondary plant, nor that tertiary effluent can be reused for beneficial uses without need for disposal to the sea via additional long and expensive outfalls.

His statement that “the Dockside Green model is not applicable to our low-density neighbourhoods” does not explain that we already have an extensive existing network of pipes that collect and convey the sewage from our low-density neighbourhoods to larger trunk mains where treatment plants of appropriate capacity similar in concept to Dockside Green (compact site, unobtrusive green design, resource recovery) could be constructed.

His statement that “bids received for the Craigflower Pump Station and McLoughlin Wastewater Treatment Plant both came in under budget” does not offer the equivalent assessment that the budget estimates were higher than the bids, notwithstanding that millions of dollars have been expended on studies to prepare them.

He admonishes us to “not give undue credibility to people whose only qualification is their ability to explore the internet,” neglecting to admit that the only place many people can find access to the myriad of reports produced by and for the sewage treatment project is on the CRD website. Fortunately for all of us, other concerned residents with personal expertise in many relevant professions have reviewed these documents on their own initiative and posted their comments on the internet for all to see.

Had he “thought outside the box” during his tenure as interim program director on the sewage treatment project, would we now be faced with the delays and increased costs that he speaks of?