The goal of the Select Committee is to produce a conceptual plan for wastewater treatment and resource recovery for Westside participants that optimizes existing infrastructure, is developed in a collaborative manner with the other core area municipalities, is environmentally sound and maximizes value while meeting the unique needs of the Westside. Consultants engaged by the Westside participants anticipate that a conceptual plan will be brought forward by March 31, 2015. The plan proposed by Westside participants, in combination with similar plans for Victoria, Oak Bay and Saanich could form the basis for an amendment to the Core Area Liquid Waste Management Plan (CALWMP).

An engagement and consultation campaign with Westside residents will be the first step in developing wastewater treatment options through the Westside Select Committee. This process will be led by participating municipalities and First Nation groups and will be supported by the CRD.

The Select Committee will recommend that the Capital Regional District Board adopt the updated Terms of Reference at the November 12, 2014 meeting.

The following individuals have been identified as members of the Westside Select Committee:
The Westside Westewater and Resource Recovery Select Committee documents can be found in the CRD's Document Library.
http://www.crd.bc.ca/project/wastewater-planning/westside-select-committee
---------------
Esquimalt candidates tackle environment
Andrea Peacock

Esquimalt residents made it made it clear at an environment-focused all-candidates meeting Tuesday that sewage continues to be at the forefront of their minds.

The recipient of the majority of sewage treatment plant questions was mayoral candidate John Ducker, regarding his competency and knowledge of the issue.

“I don’t have enough background in terms of understanding the engineering,” said Ducker. “I’m trying to learn a lot of this as I go along.”

Ducker said his main priority with the sewage plant is getting the best deal for Esquimalt taxpayers, and he will be open to all options. He clarified that McLoughlin Point, Macaulay Point and Viewfield Road are off the table.

Ducker expressed concern about the possibility of future lawsuits, and asked how much the public would be willing to pay in that situation.

“We also have to consider the potential effect of lawsuits from other municipalities and how far we will go to defend ourselves on that. If the province orders it, are we going to take them to court up to the Supreme Court of Canada and spend money on lawyers to do that? This thing should not be at all costs,” said Ducker.

Esquimalt council candidate Susan Low said she does not think it is fair for the township to have to choose between economic and environmental aspects of sewage treatment.

“The fact that we’re here is the sign that we’ve been victim of a very flawed process in getting us to this point at the CRD,” said Low. “Had the CRD properly consulted and had they kept an open mind to alternative technology and alternative sites, we would probably have a tertiary decentralized system under construction.”

Council candidate Tim Morrison said the municipalities in the CRD need to stop fighting about where to put the sewage treatment plant in order to move forward.

“It’s something we have to do as a region.”

Mayor Barb Desjardins said the plant should be put somewhere that will serve as a benefit.

“In order to take advantage of the water resource, the water reclamation, you have to site something where there is going to be a market for that.”

http://www.vicnews.com/municipalelection/280862732.html
----------------
More at stake than just sewage treatment
Times Colonist
30 October 2014, page A4
Sewage treatment comes to mind when many of us think of Esquimalt.
But there are other issues in the municipality beyond the battle over whether the planned new sewage-treatment facility should be located at McLoughlin Point on waterfront land in Esquimalt.
Many council candidates agree about what needs to be done.
They are eager to see concrete action on the Esquimalt Village Project. It has been in the works for years and there’s clearly an impatience to get on with it.
Candidates are also keen to promote economic development to create jobs and pay for community services and local improvements.
Streamlining the development process and fasttracking development permits are among suggestions.
All Esquimalt has to do is look over to neighbouring Vic West and downtown Victoria to see new condominiums opening or in the works — all bringing more residents, more businesses and more money to fund services.
Appearances count and revitalization is on many minds.
Candidates want property owners to upgrade shabby buildings. A tax incentive for businesses to help get that work started is one suggestion.
A strong sense of community and partnership is a common thread among candidates.
That’s only to be expected in a community that is rich in local history, home to Canadian Forces Base Esquimalt and has some of the oldest neighbourhoods in the capital region.
This is the place where workers poured into the shipyards during the Second World War to bolster the war effort.
Citizens of the “Malt” know what they have. They want others to appreciate it, too.
As for sewage, that issue is far from resolved and the solution is no clearer. However, everyone says they are willing to work on resolving the issue.
- GVPL Press Reader - not on TC website yet.
--------------- 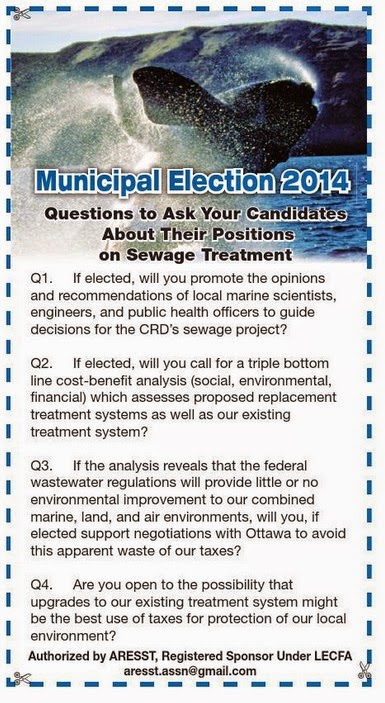 I was discouraged by the misleading and incorrect statements on sewage treatment at the first Oak Bay all candidates meeting on Oct. 23.

For example, the Saanich Peninsula Sewage Treatment Plant is not an example of a distributed system, as was stated at the meeting; it is a centralized system. The Peninsula plant consolidated the existing treatment plants serving Sidney, Central and North Saanich into a single plant because that was the most cost effective option. Likewise, the current centralized plant option reduced the cost estimate of the 2010 Core Area three-plant option (Saanich, Esquimalt and Colwood) by $180 million, from just under $1 billion. Multiple plants cost more than a single plant.

Some candidates are promoting tertiary treatment, citing Kelowna as a positive example. Existing regulations required these Okanagan communities to use tertiary treatment with nutrient removal to avoid eutrophication of Okanagan Lake. It is a step that is unnecessary for discharge to the Strait of Juan de Fuca. The capital and operating costs of tertiary treatment are greater than for secondary treatment.

Dockside Green and, on a previous occasion, Sechelt were cited as examples of what we should be doing. Unfortunately, both have a small fraction of the capacity needed to treat the core area sewage. The Dockside Green model is not applicable to our low density neighbourhoods, while Sechelt is a liquids-only treatment facility with minimal resource recovery. Comparing the unit cost (i.e. capital cost divided by capacity) of Sechelt with the McLoughlin bid, the Sechelt technology is over four times more expensive. The current proposal includes the latest secondary treatment technology, resource recovery in the form of biogas, biosolids and heat, and has the lowest cost of the many options and configurations evaluated.

The decision by Esquimalt not to amend the zoning at McLoughlin Point illustrates that any municipality in the CRD can veto CRD initiatives. It’s unfortunate that the province has not provided the CRD with the same powers enjoyed by Metro Vancouver. Metro Vancouver is proceeding with the North Vancouver wastewater treatment plant without the requirement to rezone the site.

Reference was made to the ‘Blue Bridge of sewage’ presumably as a reference to the likelihood of cost overruns. The bids received for the Craigflower Pump Station and McLoughlin Wastewater Treatment Plant both came in under budget; however, further delays increase the likelihood that the current budget will be exceeded.

Agreements are in place with the province and P3 Canada for funding in excess of $300 million as is a letter of intent from Infrastructure Canada for the balance of the $500 million. Had the zoning amendment requested by CRD at McLoughlin Point been approved, the Infrastructure Canada agreement would have been signed off. With the ongoing delays, all of the agreements will have to be renegotiated, which raises the possibility that some or all of the funding could be lost.

Both mayoralty candidates affirmed the need for a qualified municipal planner so that council could get expert advice prior to making decisions. Yet when it comes to sewage treatment, it appears that expert advice is not necessary. The individuals cited as having been consulted have neither the relevant academic or professional qualifications, nor experience in planning and designing sewage treatment projects and cannot be relied upon for sound advice.

Therefore, as we move forward with sewage treatment and resource recovery, I hope that we will have the wisdom to seek advice from people with relevant credentials and experience while challenging them to think ‘outside the box’, and not give undue credibility to people whose only qualification is their ability to explore the internet.

Sadly, I fear that with all the current uncertainty and diversity of opinion, we are all going to pay a lot more for sewage treatment than under the current plan.

- Jack Hull was the interim program director on the sewage treatment project from 2010 to 2013.

Letter by Georgia Strait Alliance's Allan Crow in today's Times Colonist below provides another opportunity to present our ARESST response to the GSA's original media release where ARESST noted the mixing sediment vs water standards in the GSA report: http://aresst.ca/2014/11/01/aresst-response-gsa-statement-sediment-coliforms/

Opinion based on sediment, not sentiment (Crow)
TIMES COLONIST
NOVEMBER 1, 2014
Re: “Leadership needed in sewage issue,” Oct. 14, and “Uninformed sentiment guides sewage debate,” letter, Oct. 16.
After more than 35 years of year-round commercial fishing and diving experience, working on and under local waters, I have an opinion regarding sewage treatment that is not based on sentiment.
In August 2013, I posted a diving video on YouTube entitled “CRD sewage outfall pollution in Victoria, B.C.,” showing the accumulation of the sewage outfall sediment and the highly degraded marine environment at Coghlan Rock, a rocky reef on the north side of Albert Head, about five kilometres from the Macaulay Point outfall.
Sediment and biological samples collected from Coghlan Rock and seven other locations between William Head and Trial Island all tested positive for unsafe levels of fecal coliform bacteria.
In the spring of 2013, the CRD’s own sampling revealed fecal coliform counts ranging from 5,000 to 13,000 fecal coliform per 100 millilitres in sediment samples collected from the seabed, beginning at the terminus of the Macaulay Point outfall and moving south for several kilometres toward Race Rocks. The health standards are about 200 fc/100 ml for swimming and 350 fc/100 ml for shellfish.
The local currents do not disperse the effluent into oblivion, but rather act effectively to expose the local seabed and marine life in the upstream and downstream tidal ranges of the outfalls to the fecal matter, microbes, micro-plastic and all the other chemical contaminants and pollutants in the 18 million kilograms of solid waste we pump into our near shore waters annually. There is no “away.”
Allan Crow
East Sooke
http://www.timescolonist.com/opinion/letters/opinion-based-on-sediment-not-sentiment-1.1490886