Sewage treatment mentioned at 13:55 minutes into his speech:

The challenge for Atwell, Desjardins and Helps, however, will be to convince the majority of their fellow sewage committee directors to see past the inevitably higher initial capital cost of distributed treatment, once those numbers have been determined. Depending on whether Langford’s Mayor Stew Young steps up and becomes directly involved in the sewage committee, votes there seem likely to split right down the middle between those who adamantly supported the failed centralized plan and those who support a distributed system.  http://focusonline.ca/?q=node%2F804

Article also went into detail about an earlier youtube video by Atwell, a Hitler parody about CRD sewage treatment plan fiasco, and how this was used by anti-Atwell campaign. Article notes a mysterious paid advert that appeared in Facebook about Atwell's Hitler-bunker video. Below is screen shot capture of that little facebook advert. Link to previous August CHEK news story about the Hitler-sewage parody video: https://www.youtube....h?v=g7xSUCavYms


Regionally, one of Jensen’s main goals is meeting federal regulations that require sewage treatment to be in place in the region by 2020.
Jensen said he wants the “greenest” and most affordable option.“We have to find a solution, it’s as simple as that.”
A proposal to build a sewage treatment plant at McLoughlin Point in Esquimalt collapsed this year.
“I trust when the core area liquid waste management committee comes back together there will be a renewed energy and renewed purpose in getting this done,” Jensen said.
http://www.timescolonist.com/for-oak-bay-mayor-nils-jensen-a-cosy-return-1.1653971
------------

Investors who own a 3.4-hectare waterfront site at Thetis Cove in View Royal have wasted no time in trying to reignite interest in their property for a regional sewage treatment plant.

The property at the end of Hallowell Road is zoned for residential development.

“It’s apparent, to us anyway, that it’s ideally and uniquely suited for the purposes of the CRD,” said Walt Neufeld, of Great Pacific Mortgage and Investments, who is an officer and director of the numbered company that owns the site located behind Admiral’s Walk Shopping Centre.

“So, we thought we’d put that in front of the CRD again,” Neufeld said.

“They’ve got a few new mayors and a few new CRD directors. I think they should revisit the site.”

But View Royal Mayor David Screech said a sewage treatment plant on the site is a non-starter and that it’s totally contrary to the town’s Official Community Plan.

Screech said he was “absolutely astonished” to see the ad, given that town staff had been working with the owners to try to get the proposed residential development up and going.

“It’s not the right site for a sewage treatment plant. It’s already been evaluated once by the CRD and discounted. … It’s just not an appropriate site at all,” he said.

Neufeld concedes that the site is zoned residential but said it’s historical use has been industrial. He noted that the site met nine of 10 selection criteria in a 2010 core area liquid waste report, surpassing all other identified sites.

“It’s uniquely situated where it’s on the water,” he said. “You can barge from it. The West Shore treatment could run under the harbour and easily pipe to this site. It’s on a rail line. It’s near a traffic artery. The historical use has been industrial.”

Esquimalt Mayor Barb Desjardins, who will be standing for CRD chairwoman at the board’s inaugural meeting today, said the property owners should meet with the community drumming up support.

“They need to go through normal public process and, if they are wanting to float an idea, they probably should be going to the community and saying what is it we can do within the community and would you be willing to look at this,” Desjardins said.

“At the end of the day, it’s how you bring it forward and how the community accepts it that makes something happen. We learned that painfully through the McLoughlin [Point] site.”

The CRD has examined Thetis Cove, but ruled it out saying it is not large enough, zoned residential and too close to homes.

The property was being marketed last year by Colliers International in Victoria at a list price of $15 million. That listing expired.

The CRD’s plans for a regional sewage treatment plant at Esquimalt’s McLoughlin Point hit a roadblock when Esquimalt refused to rezone the site and the province declined to overturn the decision.

Plans for a number of smaller sub-regional plants are being developed under the CRD umbrella. 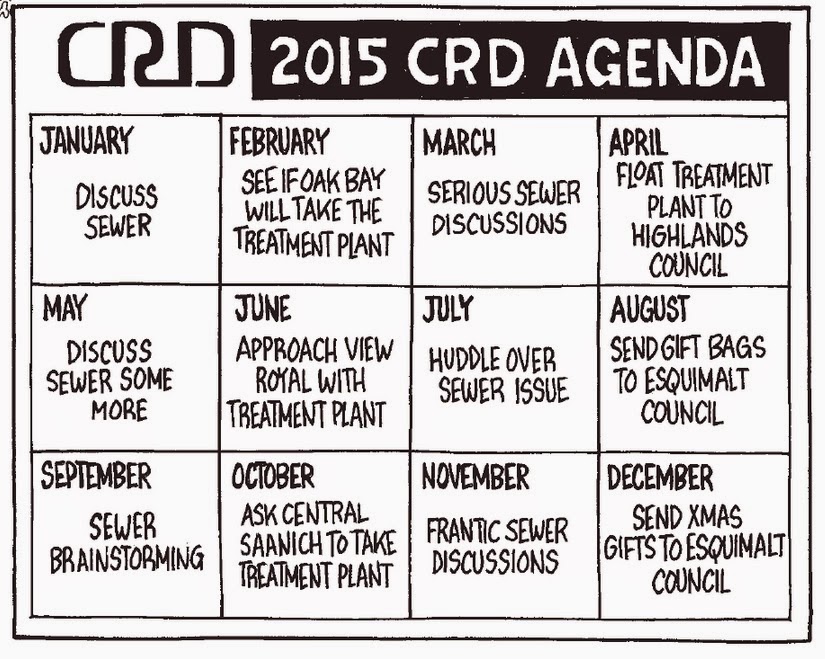 On Nov. 15, the region voted for change with the election of many fresh faces. Can these new directors help move the Capital Regional District past its disunity, smooth ruffled feathers and build regional consensus?

Progress is needed on issues of transportation, waste management and the environment.

With sewage treatment, it is not just a race to get something done before the deadline and collect provincial and federal funding. It is much more.

It is a balancing act of respecting the electorate’s desire to incorporate sustainability, environmental concerns, safety and community needs at a reasonable cost. A quick solution is not a solution at all, if it doesn’t address these important electorate needs.

For the last three years, the CRD establishment has refused to reconsider its approach to sewage treatment, stalling the extention of project deadlines and refusing to renegotiate funding agreements. Instead it has chosen to use these deadlines and funding restrictions as pressure points to attempt to force forward their secondary treatment  plan.

But with new committee membership, isn’t it time to move away from these old habits, build consensus with the core communities, and make forward progess for the benefit of the region as a whole?

Hopefully over the next four years directors can come together to stimulate change.

There is no “away” for fecal coliform (Crow)


After more than 35 years of year round commercial fishing and diving experience working on and under local waters I have an opinion regarding sewage treatment in the CRD that is not based on sentiment.
In August of 2013, I posted a diving video on youtube entitled: “CRD sewage outfall pollution in Victoria BC,” showing the accumulation of the sewage outfall sediment and the highly degraded marine environment at Coghlan Rock, a rocky reef located on the north side of Albert Head, approximately five km from the Macaulay Point outfall.

Sediment and biological samples collected from Coghlan Rock and seven other locations between William Head and Trial Island all tested positive for unsafe levels of fecal coliform (fc) bacteria.

In the spring of 2013 the CRD’s own sampling revealed fecal coliform counts ranging from 5000 fc/100 ml to 13,000 fc/100 ml in sediment samples collected from the seabed, beginning at the terminus of the Macaulay Point outfall and moving south for several kilometres toward Race Rocks. The health standards are approximately 200 fc/100 ml for swimming and 350 fc/100 ml for shellfish.

The local currents do not disperse the effluent into oblivion, but rather act effectively to expose the local seabed and marine life in the upstream and downstream tidal ranges of the outfalls to the fecal matter, microbes, micro-plastic, and all the other chemical contaminants and pollutants contained within the 18 million kilograms of solid waste we pump into our near shore waters annually. There is no “away.”

For the past two years or more, I have been reading the articles and letters to the editor about the garbage and wastewater disposal issue in Greater Victoria. We read that our landfill is bursting with refuse and hardly anybody, except perhaps those who can make money building it, wants the proposed wastewater disposal system. The proposal, in my opinion, is way behind the needs of our 21st-century city.

Why have municipal officials not made a decision to study the up-to-date garbage disposal system in Sweden?

According to the November 2014 issue of the Monitor of the Canadian Centre for Policy Alternatives, less than one per cent of household garbage in Sweden ends up in landfills. “The Scandinavian country has become so good at managing waste, they have to import garbage from the U.K., Italy, Norway and Ireland to feed the country’s 32 waste-to-energy plants, a practice that has been going on for years,” says the article.

The article doesn’t specifically mention liquid waste. It is, however, well known that it is possible to use the components of such waste to produce energy. Surely, using garbage and other kinds of waste for producing energy, Victoria could solve both its problems of a lack of landfill and an unacceptable raw-sewage treatment plant.

http://www.timescolonist.com/opinion/letters/use-victoria-s-waste-to-generate-energy-1.1637095
----------
Compare amalgamation to sewage treatment (Regier)
TIMES COLONIST
NOVEMBER 28, 2014
The subject of amalgamation is not much different from the subject of sewage treatment in the Capital Regional District.
One group wants to keep doing what we are doing now — things are working fine as they are and everything will be OK.
A second group wants to centralize everything in one place — their experts know best and will make it work somehow, whether others like it or not.
The third group wants to optimize things to suit the situation — propose innovative solutions based on thorough environmental, social and financial analysis — and residents will decide what is best for them now and in the future.
Based on the recent election results, it seems most voters support the third group. Let’s get on with it.
Oscar Regier
Victoria
http://www.timescolonist.com/opinion/letters/compare-amalgamation-to-sewage-treatment-1.1624840