Victoria mayor Lisa Helps takes on another leadership of another project

She’s the politician other politicians call on for help. Victoria’s mayor Lisa Helps is not only overseeing construction of the 100-million dollar Johnson Street Bridge. But now she’s chairing the region’s sewage committee, a project estimated to cost close to a billion dollars.

Both the Johnson Street Bridge and the Capital Regional District’s wastewater-treatment projects were given an extra year to meet deadlines before losing a combined $104.4 million in support.

Nils Jensen, chairman of the CRD core-area liquid-waste management committee, said the extension was crucial to wastewater treatment plans. The extension was granted based on an aggressive work plan with key objectives and milestones.

“It was very important. If we hadn’t gotten the extension, we would have lost an $84-million grant,” said Jensen, who also announced Wednesday that he was stepping down as committee chairman.

The CRD now has until March 2016 to submit a detailed plan for wastewater treatment in the region, or risk losing $83.4 million in funding from PPP Canada. In addition to the PPP Canada grant, the federal government has committed $120 million from the Building Canada Fund and $50 million from the Canada Green Fund toward the project.

Although the other two federal funds have deadlines of 2019, Jensen said he believed the Building Canada grant would have been in jeopardy if support from PPP Canada was pulled.

“They had made it very clear to us their funding depended on PPP funding,” he said.

Victoria also received word that the federal government has extended its funding for the Johnson Street Bridge replacement project.

“We’re proposing to wrap up some time in June of 2017 and our funding is good until March of 2018, so that’s good news,” project director Jonathan Huggett said Wednesday.

Victoria Mayor Lisa Helps welcomed the news. “What it means is that we will now be within the funding guidelines for finishing this very large infrastructure project,” she said.

“It required just a simple letter to update them on the project. I’m very, very grateful for their flexibility and also their understanding that large, complex projects like this do take time.”

View Royal Mayor David Screech is concerned the next stage of public engagement on wastewater treatment won’t give residents the information they need.

“I have heard from members of the public very strongly that they want something tangible they can make comment on,” he said Tuesday at the Capital Regional District core area liquid waste management committee meeting, held at the Songhees First Nation Wellness Centre.

“They want options A through E that they can comment on, and I don’t know that this will do that. I’m sure it’ll put out there some wonderful ideas … but I don’t see how you necessarily make the leap that they’re applicable to what we’re doing here or whether we can afford them.”

Screech was responding to the announcement of an upcoming “Innovation Days” event at Royal Roads University, April 27 to 29. The public event will see industry representatives present their responses to the Request for Technical Information (RFTI) recently undertaken by the CRD.

The RFTI attracted 10 submissions from companies demonstrating possibilities for treating the region’s sewage. A CRD staff report stated the information received should prove useful to the Westside and Eastside committees working with technical experts on developing treatment options and cost evaluations.

The CRD made it clear that the RFTI was not a call for proposals to later be tendered, but was merely information-gathering about technologies that could be implemented. However, six responses came from system suppliers – one pilot project plant and five established ones. One of those was the company that recently built a wastewater treatment plant in Sechelt, while another proposed a system for biogas treatment to convert digester gas into vehicle fuel.

Christine Houghton of Aurora Innovations, the firm tasked with project communication and overseeing the public consultation process, said the public Royal Roads event will feature a series of presentations that will also be webcast online and later be available for downloading.

Another round of public consultation and various roundtables will follow Innovation Days, throughout May.

At Tuesday’s meeting, Screech didn’t sound convinced that the process would inform people enough about their options.

“So, the idea of this is that everybody who submitted something in the RFTI can just present their case?” he asked.

“Is the public going to have any way of gauging whether this solution is applicable for us? Or is it just sort of, ‘this is what potentially is possible out there, but we really have no idea whether it’s applicable to us or is affordable’?”

Houghton responded by saying Innovation Days is meant as another “prong” in the public engagement approach, where people are given as much information as possible, then encouraged to independently conduct their own research.

“It’s to give people a better understanding of what is possible out there,” she said.

For readers looking to get a head start and look over the information before the Innovation Days event, the RFTI submissions are contained within the April 8 meeting agenda package. 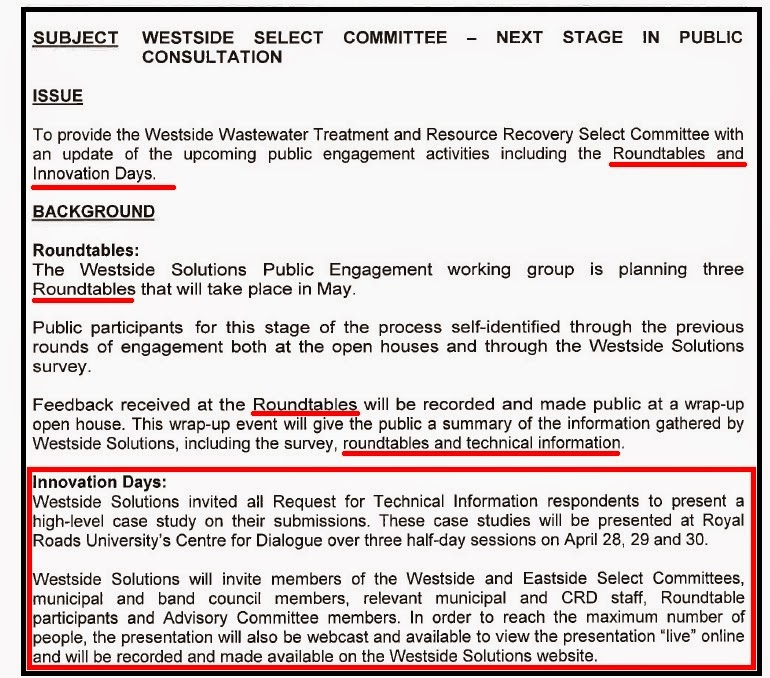 Signing of the Agreement in Principle between the governments of Canada and British Columbia and the Te'Mexw Treaty Association yesterday was good news, of course. But it was disappointing to learn how far away they are from finalizing a comprehensive agreement.

I had expected the land transfers to be finalized, and they are, apparently, as far as the provincial contribution is concerned. Still to be determined is what federal properties will ultimately be in the mix. And this is the part that is most interesting to the community at large.

There has been an underlying presumption around Victoria for decades that the best location for an eventual sewage treatment plant is on a certain point of land in Esquimalt, owned by DND. Feds have steadfastly said "don't even think about it". It's not going to be deemed surplus, and if it ever is there are so many claims on it before you that the CRD is never going to get its hands on it.

One of those claims, of course, is an aboriginal interest. You see where this is going? Some First Nation leaders have already indicated a willingness to talk to the CRD about leasing. 'Course the Te'Mexw agreement has to happen first. And it looks like it's the feds who are dragging their feet.

Now that this back story is pretty much out in the open I think it's fair game for everybody in the Capital Region: mayors; councils; chambers of commerce; ordinary citizens; to badger the federal government to settle this treaty because it's in the interests of the five bands and the region as a whole.

Why would we continue to let metals and toxins into our sewage system and then get all excited about recovering a tiny fraction of them at a great cost?

Surely, we should be focusing on more point-source control of wastes that are either valuable or, more important, the real problems within the waste stream.