Seattle newspaper is suggesting a boycott of tourism in British Columbia in response to Victoria dragging its feet with constructing a $783-million sewage treatment plant.

Last week, an editorial board supported article in the Seattle Times lambasted the Capital Region’s decades-long delays with properly treating its raw sewage.

The newspaper says past protests have been “righteous” given that the City of Victoria and its suburbs release approximately 130 million litres (21 million gallons) of raw sewage into the Juan de Fuca Strait – a volume that can fill 32 Olympic-sized swimming pools. The only ‘treatment’ the sewage from 345,000 people receives is a thin filter that separates large solubles and floatables.

Threats of a tourism boycott in 1993 ended after the provincial government signed an accord with Washington State to build the facility by 2002, but it was later delayed to 2016 and again to March 2018. Recent developments, or the lack of any development, in the project have led an air of uncertainty over the project’s completion timeline.

“A regional effort, led by Victoria Mayor Lisa Helps, is now back to the drawing board, looking at new sites, with an analysis due by the end of the year,” The Seattle Times wrote. “Washingtonians have heard this before, not to mention the excuses that the ‘natural flushing action’ in the Pacific waters off Victoria mitigate the hazards of untreated sewage.”

“Victoria can make those arguments with a semi-straight face only because their more conscientious neighbors on both sides of the border invested in these types of facilities decades ago.”

The sewage treatment centre was proposed for a 3.5-acre oceanside site at McLoughlin Point in the city of Esquimalt, but the municipal government rejected the required rezoning needed for the project to proceed – even with a $19 million incentive for the municipality’s coffers. The project fell due to an outcry from local residents, even though the site was formerly an oil tank farm and a distance away from residential neighbourhoods.

The provincial government has refused to use legislation to override municipal governments in an effort to ensure the treatment facility is constructed.

Approximately $60 million was spent planning and designing the now-canceled proposal, which would have been built with a green roof and capacity to process 124 million litres per day of sewage.

A number of sites are now being considered, but an arduous and expensive technical assessment and public consultation process is required for each option.

“Today, the Victoria region is back to square one, with no treatment plant on the horizon,” The Seattle Times continues. “The failure is an embarrassment for stately Victoria, and it undermines the rigorous work to clean up Puget Sound.” 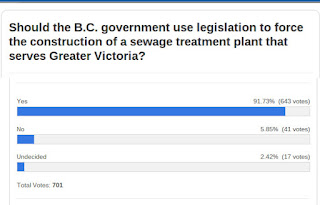 Helps responds to editorial from Seattle TimesKendra WongVictoria Newsposted Aug 25, 2015 at 4:00 PMVictoria Mayor Lisa Helps is motivated to get the Capital Regional District's sewage treatment plant on the ground after an editorial from a U.S. newspaper criticizing the timeline of the project.“I don't think I can be anymore motivated than I already am, well before the Seattle editorial,” said Helps, who is also the chair of the Core Area Liquid Waste Management Committee. “Myself and my colleagues at the Core Area Liquid Waste Management Committee are are very dedicated to getting this done for a series of reasons.”Last Sunday, the Seattle Times released an editorial “Sewage treatment: Victoria's constipated political process needs fixing,” criticizing the Capital Regional District for being slow to get the wastewater sewage treatment facility off the ground. They also threatened a boycott of Victoria.“The Victoria region is back to square one, with no treatment plant on the horizon. The failure is an embarrassment for stately Victoria, and it undermines the rigorous work to clean up Puget Sound,” said the editorial.But Helps said the timing of it was ironic since earlier that week, the committee sent out a press release about hiring consultants to complete an analysis of the work and costing options, and has selected six individuals to the technical oversite [sic] panel.“The lesson learned is we also need to brief the Seattle media. We now have a media contact for all media outlets in Seattle because had they received that press release, they wouldn't have printed the editorial because they would see that we are indeed making progress,” Helps said, adding the newspaper published her response to the editorial as well.“There was lots of information available in Seattle, but I think it just didn't get into the hands of The Seattle Times. It's a joint responsibility, they need to ask and we need to send.”The committee hopes to have a fully-approved plan by March 2016.http://www.vicnews.com/news/322892131.html
---------
CRD Finance Committee meets 2 Sept, 9:30am

This goes out to those letter writers and opinion piece contributors who readily jump on the “...science-based evidence that the receipt of screened sewage offshore in the Strait of Juan de Fuca is a uniquely non-contaminating system...” bandwagon.

I invite them, one and all, to demonstrate which part of “non-contaminating” applies to the discharge of micro-plastics and pharmaceuticals, which can no longer be conveniently disregarded because they are not “organic.”