Some issues heard at Westside sewage committee this morning: - Norma Brown presented her concern that social and environmental aspects of the project are missing or undervalued. Later, Helps and Desjardins suggested more clarity by CRD in showing the social/enviro aspects;- Young reiterated emphatically his concern that CRD sewage project deadlines are a huge problem;- Helps says CRD will be going to Ottawa right after election to lobby new federal government for continuing support to CRD sewage project. Young says should go to Ottawa to ask for bigger federal support, with example is getting more for tertiary treatment;
- Desjardins suggests could be useful to have Esquimalt First Nation on Westside committee but Screech sees conflict of interest with that given potential sewage plant site is owned by that FN. Westside will seek legal opinion that may impact on Songhees role and CALWMC;
- Young asked for and CRD will deliver an accounting for total funds spent to date for CRD sewage project. Young said he's not sure its $60 or 70 million but he had heard that the figure didn't include staff time.
---------
CRD Fairness and Transparency Advisor Open for Business (sort of)

and is available on the Fairness and Transparency Advisor’s webpage on the CRD website (can't find it yet).
----------
McLoughlin sewage treatment proposal finally cancelled

The McLoughlin option has been kept alive, without fanfare, until a matter of a few days ago, with negotiated extensions of commercial bids to build the project.

But SeaTerra Chair Brenda Eaton says the Request for Proposals that went out to the private sector 26 months ago has now been cancelled, and three firms that submitted bids have been so notified.

Each of them will be entitled to a quarter million dollars in compensation for the work they did on bid preparation.   Eaton calls that "standard industry practice".

A final, $750,000 nail has been driven in the coffin of plans to put a sewage treatment plant at McLoughlin Point.

Lisa Helps, chairwoman of the Capital Regional District’s sewage committee, confirmed Saturday that the Esquimalt site has now been formally ruled out.

The three firms that presented formal proposals to build a sewage treatment plant there will each be paid $250,000, as previously agreed by contract.

“It kind of puts to rest or to bed the McLoughlin proposal,” said Helps, who is also Victoria’s mayor.

The CRD was forced last year to abandon plans to put a $230-million sewage treatment plant at McLoughlin Point after Esquimalt refused to rezone the former gasoline tank farm.

About $60 million — and nine years — had already been spent on the project, mandated by the provincial government, by that point. The entire project, initially budgeted at $788 million, was to be in operation by 2018.

Helps said it’s time to get on with making plans for treating sewage. “Am I frustrated about the amount of money that’s been spent? Yes,” she said. “But McLoughlin has been a shadow hanging over us and our ability to move forward.”

Esquimalt Mayor Barb Desjardins, who opposed a sewage plant at the site, agreed.

“With McLoughlin still hanging around, it was creating some unease and distrust,” she said. “The new process can now move forward and we’ll come up with a great plan.”

The CRD has established two committees to look for a new sites.

So far, the eastside select committee, made up of representatives from Victoria, Saanich and Oak Bay, has short-listed eight possible sites.

The westside committee for Esquimalt, Colwood, View Royal, Colwood, and the Esquimalt and Songhees First Nations has identified 20 possible sites.

The plan is to embark on public consultations and study. The final selection could come down to one central site or several sites.

The CRD is under the gun in terms of timing. The federal government has promised funding of $253 million, but a site and plans for a plant have to be finalized by 2016 in order to secure it.

According to the CRD, Greater Victoria dumps an average of 82 million litres of raw sewage into the Juan de Fuca Strait every day. The sewage is screened before being discharged, but is otherwise not treated. The provincial government requires the region to adopt secondary treatment, which uses bacteria to consume the organic matter.

Critics of the sewage treatment plan say that ocean currents are effective at breaking down the waste and no further treatment is needed. 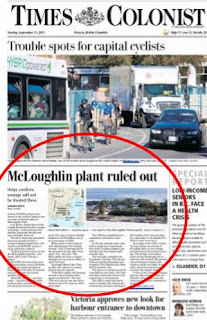