-  Getting sick and tired of being nickel-and-dimed (Frye)

Save the Date - more information and agenda to come!

On Dec 11th, the CRD will elect a new chair.Mayor of Metchosin John Ranns <jranns@metchosin.ca> would make a great CRD Chair. He ran last time but was beaten by Alastair Bryson who gained the support of sewage project backers. Please consider sending him your support with an email.John was instrumental is pulling back the cover on Seaterra's push to get the CRD to roll back its 2011 on the land application of biosolids.Watch John Ranns ask for accountability and get to the bottom of the trucking of biosolids:http://www.youtube.com/watch?v=L1bde7tunjY2012 was a terrible year for the CRD and part of that blame has to lie with Alastair Bryson who let staff lead him by the nose and get him into a lot of trouble. Bryson chose to sit in the audience at the CFAX live-debate on April 5thand let Geoff Young take the slings and arrows for the CRD even though he was the Chair of the CRD. This isn't leadership.My letter:Dear Mayor Ranns,I hope that you are considering running for CRD Chair and have shared this desire with other CRD Directors.The CRD is in need of strong leadership and oversight of its many services, particularly with the integration of liquid and solid waste planning that would best serve the region's needs while at the same time providing the best value for taxpayers.Sincerely,Richard Atwell, DirectorSewage Treatment Action GroupWatch the CFAX April 5th event: http://www.youtube.com/watch?v=57v4MIbWOS0

- Anyone who is concerned about the sewage project may attend

The RITE Plan Display on Saturday!

Big thanks to David and The RITE Plan gang for their outdoor display in very cold weather!
Another engaging public spectacle today, brought to you by The RITE Plan. Among the many supporters was mall security and the Victoria Police.

Thanks to Tom, Russ, Brian, Eric, Carole, Richard & Soren for your attendance & support! 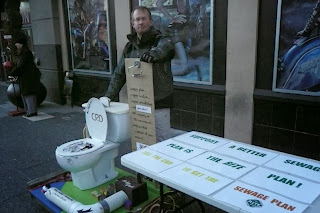 Irony of having the volunteer gathering donations for charity near RITE Plan display of wasted money... 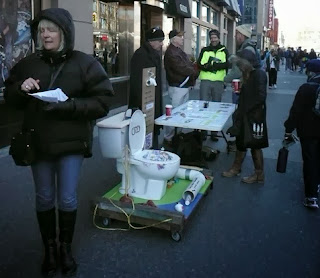 Richard Atwell attended a private Willis Point Community Association meeting December 2 and his report is below:

The CRD came to answer questions from concerned residents about the impact from the Hartland "ticking-time-bomb" facility and the 18km pipeline that will wend its way through Saanich to their community.

The CRD Directors and Saanich Councillors who have made these decisions continue to refuse to attend any public meetings but this time they've taken steps to protect the CRD Staff they throw to the lions by hiring an out of town negotiator to no doubt to help calm down the natives:

As it turns out, Mr. Verlaan is a former employee of Golder Associates, HB Lanarc Consultants who have consulted with CRD on this sewage project:

Hicks represents Willis Point which is in the Juan De Fuca Electoral Area and part of the CRD but in the CRD's broken governance model, he has no vote at the sewage committee.

Judy Brownoff who's gone into hiding recently, gets a vote and she was allowed to vote the facility into Viewfield away from her residents but Hicks gets no such vote.

This all sounds NIMBY but can you blame people who are going to be impacted by a heavy industrial process that could be completely avoided with a look at neighbourhood compatible technologies.

Dr. Sally Brown, who came to speak at the infamous Oct 30th meeting wasn't there but her biosolids were on display.

So, what's more likely? That she brought they up from WA state when she visited and managed to get them through customs and left them behind or these have been CRD props the whole time?

Here in Victoria, the “City of Gardens,” we take pride in our spectacular natural surroundings and our environmental consciousness. It therefore comes as a disgraceful embarrassment to most that such a self-proclaimed “green” city would be spewing raw, untreated sewage into our beloved coastal waters.

Approximately 1 500 litres per second of raw Victoria waste is pumped out of two deep-ocean outfalls, just over a kilometre from the shore. Approximately 130 million litres a day are flushed out the pipes, enough to fill 52 stinking Olympic-sized swimming pools. This reckless expulsion of sewage has prompted demands to build multiple sewage treatment plants throughout Victoria, a plan approved by the B.C. Minister of Environment in August 2010. The science behind this decision, however, is not as clear as you may think.

The fuss over poop

Sewage has become a subject of increasing concern, because sewage in the ocean tends to trigger blooms of algae—a process known as eutrophication. Eutrophication occurs when large volumes of nutrients are added to water bodies. These nutrients act as fertilizer for phytoplankton, which are microscopic photosynthetic plants in the top layer of nearly all bodies of water. When phytoplankton eventually die, they sink and are decomposed by bacteria at the bottom of the body of water. As these bacteria work, they consume oxygen, ultimately causing the development and spread of “dead zones”—areas where the dissolved oxygen levels are too low to support life.

In regions where human waste is emptied into an enclosed body of water, sewage treatment has been highly effective in preventing eutrophication and maintaining a healthy ecosystem. Scientific evidence, however, suggests that the current system is not only economically favourable, but also more environmentally sound for our area.

Why fix what isn’t broken?

Scientists from the University of Victoria, the Institute of Ocean Sciences, and those hired by the Capital Regional District (CRD) have been monitoring the outfalls at Macaulay and Clover Point since the 1970s. Their research indicates that the impacts of sewage outflow on the communities of organisms that live on the ocean floor have been relatively minor and limited to within 100 metres of where the sewage goes out. Also, no evidence of oxygen depletion in these systems has surfaced, suggesting that fears of a dead zone may be unfounded.

The net current carries virtually all dissolved sewage effluent out into the Pacific Ocean, due to the incredible volume of fresh river water flowing into the Georgia and Puget basins. The resulting dilution of nutrients in the open ocean precludes eutrophication. Additionally, shoreline monitoring and ocean water surveys have clearly demonstrated that the ocean outfalls have no role in beach contamination. Instead, stormwater discharges have been identified as the true culprits.

The trouble with treatment

A treatment plant raises many serious issues. Someone has to run the thing. While this would create a few jobs, treatment plants pose health hazards to workers, exposing them to many types of micro-organisms and chemicals. A higher prevalence of respiratory disease, fatigue, and headaches may be reported by sewage plant employees, relative to control groups. Sewage plant employees also suffer increased incidence of gastrointestinal tract symptoms, as well as greater risk of infection, especially of hepatitis A.

Then, the waste would need to be transported across town by pipeline, to a sludge disposal facility. The CRD has expressed interest in two sites: one on Viewfield Road in Esquimalt and the other near the Hartland landfill. Both communities, however, have voiced strong opposition to the construction of this facility in their municipalities. The final method of sludge disposal has yet to be determined. Dealing with the risks of soil- and water-contamination is a whole other can of worms.

Notwithstanding the environmental impacts of a treatment plant (and there are many!), the scientific evidence suggests that the implementation of this $783-million plan will not benefit the marine ecosystem adjacent the outfall pipes. Taking these potential consequences into consideration, the benefits of this project simply do not outweigh the costs. In an era of constant cutbacks to environmental projects across the country, this money should be directed elsewhere.

Getting sick and tired of being nickel-and-dimed (Frye)

I wonder if there’s an evil genius hiding in a bleak mansion somewhere behind the Malahat, rubbing his hands with glee, pulling the strings of public agencies who seem hell-bent on driving residents into the ground and sending limited-income seniors into abject poverty.

“It’s only a few percentage points,” the agencies say. But when you add up these “small” increases – in water rates, school taxes, transit levies, garbage collection fees, sewage treatment and others – it can be a couple hundred dollars a month.

Add the increases forced on users by B.C. Hydro, B.C. Ferries and FortisBC with no real oversight and blatant political interference in the process, and one cannot help but feel Big Brother plans to keep us in thrall to the power brokers. It truly may be time for revolution.