Save the Date - more information and agenda to come!

I'd just like to make an appeal to ALL RITE planners & everyone who is concerned about the sewage project (let's face it, everyone in greater Victoria should be concerned!). The next few months are going to be critical. If this campaign is to succeed, it's not enough to just make Facebook postings. You need to get physically involved. Like the video says, "we need more poops on the ground!"

Like my wife always says, women are smart & they're always right, so hopefully these two minister's can get it right!
Attend the Sewage Strategy Summit & Subsequent Social Soiree on Saturday, December 21. Message me for details.
Attend public events / RITE plan table set ups / flyering campaigns. What for postings or message me for details.

- Anyone who is concerned about the sewage project may attend

Denise Blackwell was on CFAX this morning with Al Ferraby talking about the rezoning of "Macaulay Pt":

- She claims you'd need the same amount of cement to rebuild the Tudor House as you'd need for the sewage treatment plan so barging isn't a big deal.

Esquimalt gets what it wants in sewage pact

Greater Victoria politicians approved a multimillion-dollar sewage compensation package for Esquimalt Wednesday, but took so long dickering over the details that they might incur $1.8 million in extra expenses.

The Capital Regional District sewage committee voted to approve a new rezoning application for a treatment plant at McLoughlin Point in Esquimalt — one of the last major hurdles before the contentious megaproject can begin construction.

The proposal includes up to $13 million in amenities, such as barging construction materials to the site, as well as previously promised oceanfront walkways, bike lanes and road improvements.

However, the CRD needs Esquimalt council to approve the deal. Esquimalt says it can’t hold a required public hearing until mid-February at the earliest.

That pushes the project at least two months behind schedule, at $900,000 per month in extra management and inflationary costs, said project director Albert Sweetnam.

However, CRD politicians appeared more concerned with whether the proposal to Esquimalt was too rich, and if the municipalities they represent should also be compensated for truck traffic caused by building the plant.

Barging materials to McLoughlin Point will remove 2,885 truckloads of excavation material and 1,105 truckloads of concrete over several weeks, CRD staff told the politicians. That equates to 60 trucks a day that aren’t rumbling through a residential neighbourhood and near École Macaulay Elementary.

Victoria Mayor Dean Fortin questioned where the barge would be loaded and if other municipalities would be compensated for truck traffic.

Oak Bay director John Herbert echoed the concern and queried the costs. “What we are providing to Esquimalt in my mind is too rich,” he said. “Oak Bay loses about $1.6 million in taxes to a variety of organizations and facilities that don’t pay taxes and we’re a pretty small municipality but we’re not running around saying give us more money.”

Victoria Coun. Geoff Young, the only director to vote against the deal, said the costs were “at the very outer limit of what I think is reasonable.” Young proposed capping the barging bill at $1.5 million, with overruns covered by eliminating amenities. CRD staff said that would probably fail a legal challenge.

Several other directors raised concerns that barging, estimated to cost as much as $2.3 million, remained an uncertain and expensive proposal. However, they also argued for a quick deal with Esquimalt; there have already been several months of negotiation, and a proposal was rejected last month.

Politicians voted against a staff suggestion that they prepare to appeal to the provincial government for help, if an impasse is reached with Esquimalt. Instead, they said they first want to let Esquimalt residents speak their minds on the proposal.

Esquimalt was ready for a public hearing in November, but has been waiting for the CRD, she said.

“I was concerned we weren’t going to get this far, so I’m happy from that perspective.”

Esquimalt council will meet in January to vote on a public hearing date.

The idea of a sewage plant at McLoughlin Point remains deeply unpopular with some Esquimalt residents and members of council, no matter the amenity package.

The sewage project is budgeted at $783 million, with an expected completion date of 2018. 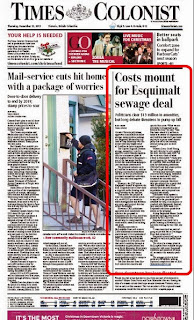 A presentation of plans to upgrade and expand the Clover Point pump station will be made Monday.

The pump station will be upgraded and expanded beginning next fall as part of the region’s sewage treatment program.

A new forcemain will run from the pump station along the south side of Dallas Road to Ogden Point, then under the Victoria Harbour via a marine crossing to the treatment plant planned for McLoughlin Point.

The seaside walkway and the rock wall along the existing pump station will be extended to make room for the new, expanded station, which will be located below ground.

The meeting will be hosted by Fairfield Gonzales Community Association’s planning and zoning committee at Fairfield Community Place, 1330 Fairfield Rd., at 7 p.m. Monday.

For more information on the plans, go to the Capital Regional District's Seaterra site.

Cartoon caption in this December 14, 2013 recycle of 2007 cartoon also ironic because was likely Premier Campbell's concern about possible Olympics-linked media frenzy over Victoria's marine sewage system that pushed province to push CRD into short deadline for a bad plan. 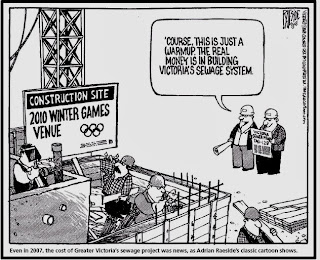 We are pleased to see continuing discussion in Focus of the local sewage treatment issue. The overriding impression we have of the CRD’s continuing plans for land-based secondary treatment, or suggestions by others for tertiary treatment, is that the allegedly scientific arguments put forward in support are very superficial. Protection of the marine environment is supposedly a primary goal, but nowhere can one find a detailed, quantitative, rational analysis of what the problems are with the present system and how the proposed schemes will fix them. The BC government’s order to the CRD in 2007 was largely based on the qualitative and inconclusive SETAC report. Similarly, the federal government’s “one size fits all” regulations are clearly inappropriate in failing to take account of differences in receiving environments and hence different impacts and risks. The CRD’s willing compliance is disappointing.

Before spending a billion dollars, it would seem sensible to answer questions such as 1) What are the present or potential problems with wastewater and other discharges into the local marine environment? 2) How serious are these problems? 3) What are the major sources of the problems? 4) Will a proposed remedy eliminate or even reduce the problems without creating bigger impacts? 5) Are there better solutions than the ones proposed? 6) Is addressing the problems a high priority for marine environmental protection?

Materials of concern such as heavy metals and pharmaceutical compounds are certainly present in the screened wastewater. However, rather than declaring them to be toxic or harmless, we really need a quantitative analysis of their concentrations and effects. Such an analysis has not been officially conducted.

Many of us in the marine science community who have examined the issues, based on the excellent monitoring work of the CRD’s scientists together with consideration of local oceanographic conditions, have concluded that 1) in spite of some uncertainties, the impact of the present system is small, and 2) land-based secondary treatment in the Juan de Fuca Strait region is a low priority for marine environmental protection.

Much greater benefits for the marine environment could be achieved for a fraction of the cost of the proposed scheme by focusing on more serious issues such as habitat loss, harmful invasive species, and making our local ecosystem more resilient to climate change and ocean acidification.

(The above are all current, former, or adjunct professors of marine science, Tim Parsons at UBC and the rest at UVic.)

It’s disheartening to get yet further confirmation of the inability of the Capital Regional District’s sewage committee to manage what they envisage as a multimillion-dollar project. Envisaged is the correct descriptor of this hoped-for future project, as no sewage-treatment site is yet confirmed and cost estimates continue to grow. No verified budget means there is only project probability (which appears to be moving to project-possibility status).

Particularly galling is the report that there are about $13 million in Esquimalt-focused amenities that include oceanfront walkways, bike lanes and road improvements (none of which are sewage-treatment requirements). It might be too late for the CRD to regain taxpayers’ trust in site selection. Nevertheless, the CRD should admit to what taxpayers already realize — the so-called “amenities” are really “bribes.”

The project director’s identification of $900,000 per month as additional management and inflationary costs incurred by delaying approval might have been intended as motivation for CRD decisiveness. However, as ever-paying taxpayers, we should now fear ever-greater future costs.

The project director’s verification of such high monthly incremental costs being incurred without yet having project confirmation has likely put paid to any chance of achieving 2018 project completion within the proposed $783-million budget.

Let’s hope we’ve some elected leaders within the CRD who realize there is no need to yet “go public” but are quietly working up “Plan B.”

The Capital Regional District’s $783-million waste – otherwise known as the sewage plan – has encountered a huge amount of opposition from outside and in: environmentalists, professors, even some CRD board members.

There are many groups of concerned volunteers in Victoria trying to get the CRD to wake up. Those volunteers have been contributing time and their own after-tax money to fight for Richard Atwell’s RITE plan, which would be to everyone’s benefit.

On one side, Victoria’s volunteers have to work to feed their families, to pay tax, and to fight the CRD without financial support. On the other side, the CRD has abundant tax dollars and they can always get more from our pockets.

It seems that it’s very hard for the RITE plan to get the attention of the majority of decision makers. At the same time though, more citizens are realizing the CRD is on the wrong path.

Will their resources and “public education” (Seaterra advertising) overcome the growing public outcry?

By bungling the Viewfield Road sludge plant proposal, the CRD has already lost the trust of Greater Victoria residents. Now, they’ve lost control of the whole project and they’re about to lose face, so they’re scrambling to justify this sinking ship.

The more they engage in damage control, the more your tax dollars will suffer.

CRD not playing by the rules (Rose)

It is interesting to note that the recently formed Core Area Wastewater Treatment Program Commission has followed in the footsteps of the CRD committee on wastewater. They routinely adjourn their meetings to in camera, denying the public access to the discussion. They use section 90 of the Community Charter to do this and this is clearly stated in the minutes. However, it should be pointed out that they are not a municipal body, they are not municipal employees, they were not elected to office, they have not sworn the appropriate oath, and as such they are not permitted to do this. Shouldn’t they and the CRD directors who supported this action step down for being in contempt? The Charter is quite clear in this respect and so are the consequences.