Have your say on the sewage treatment proposal

On Dec. 11, the Prospect Lake District Community Association  (PLDCA) co-hosted a successful Informational Dialogue with staff from Seaterra, the company in charge of managing the sewage treatment process on behalf of the Capital Region District (CRD), to gain better understand the details of the CRD’s plans for Hartland.

After hearing Seaterra’s proposal, the PLDCA agreed that sewage treatment is required but feels that the CRD process is flawed and out of control. They are therefore asking the BC government to keep its funding on hold but require an independent review of the plan with “formal engagement of the public to ensure that the final plan is taxpayer-friendly, respectful of residents, innovative and environmentally responsible.” (Click here to sign the petition.)

Raeside's sewage cartoons appearing in 28 December Times Colonist retrospective over 2013. introduced with note that these are some of Raeside's favourite cartoons and "In 2013, the Malahat, the sewage treatment project and ferries felt like old friends..." 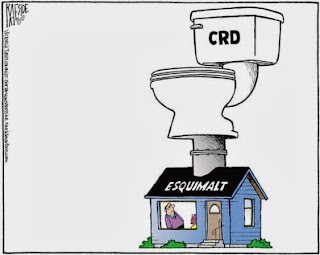 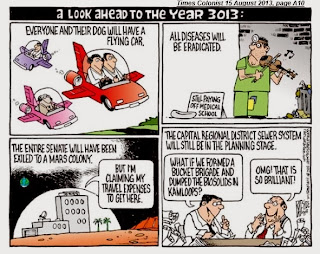 The longest-running comedy in Victoria wasn’t John Cleese’s eight-show appearance at the Mac. No, it was the stumbling-through-the-cowpies farce that is the Capital Regional District’s attempt to push along a $783-million sewage-treatment system that many doubt a) is needed and b) will work.

Politics regularly trumps science when it comes to the newly branded Seaterra (which sounds more like a mini-van than a high-priced cesspool). Stunned to discover that treatment doesn’t magically turn human waste to fairy dust, politicians are now trying to figure out what to do with the leftover sludge; having rejected disposing of it on land, they are leaning toward building a $35-million incinerator and pumping it into the atmosphere instead.

Earlier, the CRD ambushed Esquimalt with plans to pipe sludge from a proposed wastewater-treatment facility at McLoughlin Point to a biosolids plant at nearby Viewfield Road. When residents balked, the politicians decided to ship it 18 kilometres uphill to the Hartland dump instead. The only way this story will get goofier is if we learn Enbridge is building the pipeline.

Meanwhile, the CRD is trying to figure out what to do with the Viewfield property, for which it (over)paid $17 million.

So far, we have paid tens of millions on this project without so much as an outhouse to show for it.

- from GVPL PressReader - no URL 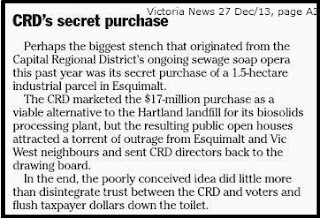 Fees for sewage will keep rising (Burchill)
Times Colonist
27 Dec 2013, page A19.
Re: “Langford considers moving sewage fee onto water bill,” Dec. 19.
The mayor and citizens of Langford are shocked about the tax levy of tens of dollars, but they ain’t seen nothin’ yet. The levy is going to keep escalating to hundreds of dollars against all households of the core municipalities.
And the biggest “lose-lose” of the whole sordid mess is that there has never been any proof that the billion-plus dollars of our taxes going to be spent to replace the world-class system of sewage treatment that we currently have will result in any net benefit to the region. Expert opinion is that the net impact will be environmental degradation.
It’s an outrage and embarrassment that funds will be spent for so frivolous a project when there are pressing issues where money deserves to be spent, such as for fellow Canadians who are still living without clean running water and basic sanitation, having to boil their water and use slop buckets and outhouses year-round.
Brian Burchill
View Royal
(PressReader edition through GVPL, not in TC online edition)

Few positives about sewer project (Ferguson)
Times Colonist
27 Dec 2013 (page A19 PressReader edition, not yet in online TC)
Re: “Wishing for some positive letters,” letters, Dec. 24.
I agree; it would be a delight to read positive letters in the Times Colonist. In the case of the “sewer project,” though, you’d have to be rather uninformed or awfully naïve to say something positive about it.
It could be true that your grandchildren might have job opportunities in the short term. Wait until they experience the crippling taxes that will result and the longterm debt that we will all have to bear. All for an idea that has no justification.
Let’s try to think of a better example for a positive letter.
Dave Ferguson
Saanich

Your article incorrectly states that “the [sewage] treatment process will dump clean water into the ocean, and pipe the leftover sludge to Hartland.”

The proposed treatment plant will not remove most of the contaminants of real concern (pharmaceuticals, chemicals and metals) found in small amounts in our sewage stream. It’ll take out some of it, but nowhere near most of it.

Our current source-control program is far more effective at getting these contaminants out of our sewage stream than the 100-year-old technology being foisted upon us poor taxpayers.

Ironically, the sludge that will be piped up to Hartland Road is the most benign part of our sewage stream — simple biodegradable human waste that our ocean now processes and assimilates within a few hundred metres of the outfalls.