The next Sewage Strategy Meeting will be held on SUNDAY, JANUARY 12 from 10 AM until NOON.
Everyone who is concerned about the sewage project is welcome to attend!

Those who have already contacted me will also be informed via e-mail.
Email dferguson1958@gmail.com for directions

Volunteer for CRD Round Table on Environment! 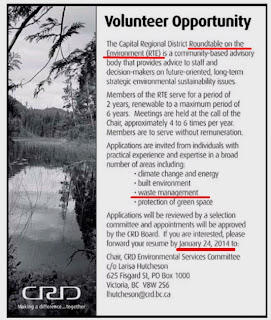 Atwell on CFAX:  End of year review of sewage debacle

Westshore Chambers of Commerce President Dan Spinner was on CFAX today (Jan 1st), talking about the sewage plan:http://theriteplan.ca/media/140101_CFAX_Dan_Spinner.m4aEveryone agrees, in this election year, sewage is going to be the #1 issue for 2014.

Recall the CRD’s open house sessions back in June of this year? Their stated purpose was to provide information and get feedback on its Biosolids Energy Centre (BEC) proposal for Esquimalt’s Viewfield neighbourhood. And although the CRD’s policy commitment is to provide balanced, objective and complete information, it was anything but. One key poster 1303 was so blatantly misleading, it had to be removed.

But the CRD failed to learn from this experience that it must honour its public participation information policy as the foundation of public engagement, specifically, that it can’t proffer public relations as public engagement. And its most recent open house suggests it still hasn’t learned that lesson. The meeting, sponsored by the Fairfield Gonzales Community Association (FGCA), concerned the CRD’s rezoning application for a 12,000 sq. ft. expansion of the Clover Point wastewater pumping station as part of its Seaterra Program sewage project.

The City of Victoria’s (CoV) Notice of Meeting made no mention of the size of the expansion, nor was a copy of the notice posted on the building site. Just 16 people, those living within 100 metres of the pump station, were officially notified of the open house. Only a last-minute leafleting of the neighbourhood by concerned citizens attracted a standing room only crowd of over 100.

The official notice explained that the community association meeting was the first step in the rezoning process, as required by the City. Step 2, it said, would be for the CRD to consider any feedback received at the meeting and then, as Step 3, formally submit its application to the City. What it failed to mention however, was that a formal rezoning application, accompanied by detailed drawings, i.e. Step 3(!), had been presented to the City by the CRD on Nov. 15th, over a month before the FGCA meeting.

Open Victoria has also learned that an FOI request for a copy of the plans (so the public could review them prior to the meeting) was denied by the CRD. And another source, someone familiar with city rezoning procedures, was shocked that detailed drawings weren’t presented at the community meeting itself. He described it as “unheard of” for an applicant not to include full drawings of all aspects of a proposed project to the community review meeting.

The meeting began with a slide presentation by CRD engineer Malcolm Cowley that included a dozen or so drawings and schematics of the planned pump station expansion. The last couple of slides listed some upcoming public information sessions and identified Mr. Cowley and Kristin Quayle, Seaterra Communications Coordinator, as the CRD reps to contact with any questions. Ms. Quayle was present at the meeting and was asked the following question about Seaterra’s communications:

In its public participation framework, the CRD commits to providing “balanced”,     “objective”,”complete” and “accessible” information to enable active citizens’ involvement in CRD decision making. The corresponding responsibility of the public is to avail themselves of this information “to become informed and educated”. However, the CRD’s information at the Viewfield public engagement sessions didn’t meet these crtieria…. Nor did the CRD’s notice of tonight’s meeting…    In its RFP for Seaterra Program Communications, the CRD claims that it is “…committed to ensuring targeted and timely communications to stakeholders and the public”. Will the CRD, tonight, also promise that in addition to being targeted and timely, all future Seaterra communications will be balanced, objective, complete and accessible?

(Given the CRD’s track record of PR as public engagement, it’s a perfectly appropriate and very important question.)

Will the CRD finally learn from its FGCA experience on how not to do public engagement? The jury’s out but returns January 26, the day after the next CRD open house — slated to be a full public information meeting about the Seaterra project in general. So stay tuned.

Residents of Esquimalt have yet to give their final say on the latest tentative agreement to base the Capital Region’s sewage treatment plant at McLoughlin Point.

But that isn’t stopping Seaterra –  the branded name of the overall program –  from moving forward with planning this $782-million infrastructure project. And 2014 looks to be the busiest year yet.

“I think people are more upbeat than they have been in a long time,” says Seaterra program director Albert Sweetnam.

After a “huge” initial pushback from Esquimalt following the first public hearing on the rezoning for the treatment plant, four hard months of negotiation and a lengthy discussion around the CRD board table in early December brought agreement on an amenity and mitigation package for the Township.

“We feel that this is an excellent deal for Esquimalt, in terms of both mitigation and compensation,” Sweetnam says.

Esquimalt Mayor Barb Desjardins agrees and says she hopes citizens across the region will be given more certainty about the project soon.

Whether her citizens feel the same way is at issue – a public hearing on the new deal is expected to be held no earlier than February.

Sweetnam refrains from framing the Esquimalt situation as frustrating, unlike CRD board members who have hinted that the process has been somewhat hijacked by one demanding municipality, albeit the one hosting the largest component in the planned system.

With groups in the region calling for everything from complete shutdown to more marine environmental reviews to asking the province for a deadline extension to allow a total rethink of its plans, Seaterra took the initiative to produce a “Myths and Facts” handout and make it available at public meetings.

“We love the public to be party to these processes as much as possible. However, it’s important that the public actually inform themselves before taking very strong positions,” Sweetnam says.

Work continues behind the scenes at Seaterra on the project, as well as in various municipalities, where infrastructure will be upgraded in preparation for the new system.

The project’s key component benchmark objectives for this year:

The Capital Regional District is still at least a year from building a sewage resource recovery plant at Hartland Landfill, but area residents are trying to pressure government to explore alternative plans.

The Prospect Lake District Community Association launched a petition in December for the CRD to seek a two year delay from the provincial government. The association expects MLA Lana Popham to table the request in the legislature in February.

Fred Haynes, with the PLDCA, said Prospect Lake and Willis Point residents are concerned the methane recovery plant will add air pollution to the area, and that the region hasn’t adequately explored site options. The CRD will need to build twinned 18 km pipes between the planned McLoughlin Point treatment plant and Hartland Landfill to transfer biosolid waste.

“We want to take two years to have a independent analysis of the appropriate technology and if there are alternative locations,” Haynes said. “This isn’t about NIMBYism. This is speaking out for the good of the whole region.”

Haynes said if regional sewage treatment goes ahead as planned, Saanich residents will need to discuss what kind of improvements they’d like to see as crews install underground pipes to Hartland.

Saanich Mayor Frank Leonard said the municipality will be building a request list for the CRD of improvements to roads and trails, based on community feedback.

“Roads, traffic and trails, anything transportation will be high on the list,” Leonard said. “Ultimately we will have a list of improvements that will accompany the addition of the (biosolids) plant.”

One facet of regional sewage treatment that will likely begin in 2014 is construction of an underground tank next to Haro Woods in Cadboro Bay.

The 5,000 cubic metre tank would to catch overflows from sewage lines during major rainstorms. Leonard said the site has been surveyed and construction is expected to start in the new year.

- Published headline for this story as it appears in Saanich News, 1 January edition (page A7) is "Rural residents aim to flush biosolids plant".
http://www.vicnews.com/news/238064691.html

Look at far end of poll options to see that sewage was biggest story, although besides McLoughlin and Hartland, Esquimalt Vic West sludge plant issue (March-July) may have been large contributor to keeping sewage top of mind for many CFAX listeners.

Vic News in their editorial puts sewage and amalgamation as the top issues for this years municipal election:

Is CRD’s Sewage Plan the Solution?

here is a lot of talk about the CRD’ proposal for sewage treatment.  But are they talking about the right things and why should folks in Saanich care?

The CRD are proposing a centralized secondary treatment solution with one part at McLoughlin Point and the other part, the sludge part, at Hartland Road. This solution is expected to meet the region’s needs until around 2030 when another treatment plant will be built, likely in the Western Communities. According to Green Party MLA Andrew Weaver, the solution doesn’t match the problem.  Richard Atwell of theriteplan.ca doesn’t think it’s the right solution either.  Both think a distributed system of smaller facilities is the answer.

No wonder we are dealing with the plan the CRD came up with when Brownoff was at the helm:

"But what about the sludge? According to Brownoff, the sludge from distributed systems will end up at Hartland Road, joining the sludge from Central Saanich and Sooke that is currently adding ammonia and other toxins to the hazardous waste area of the landfill."

This shift under consideration will move this fee from property taxes to water bills, which would, in the mayor’s words, be a “lose-lose” situation for seniors.

There are a surprisingly large number of seniors living in Langford who fit in with the city’s “aging in place” policy. I know quite a few of them, many who are barely making ends meet and many who are too proud to accept any help.

Their “lifesaver” is our treasured provincial property-tax deferment program for seniors, which allows them to stay in their homes. This program lets seniors who enrol defer property tax on their homes, with an interest rate of only one per cent, until either death (but surviving spouse can continue) or change in ownership, when the accumulated taxes plus interest become due and payable.

Seniors in the CRD, but likely not in Langford, will be able to defer their initial $37.68 sewage-treatment fee, rising to an eventual $332 fee, on their property taxes. This “shifting around money” is not going to be fair, but disastrous for many seniors in Langford, who can only hope that the city will push the pause button and reconsider all implications and repercussions.