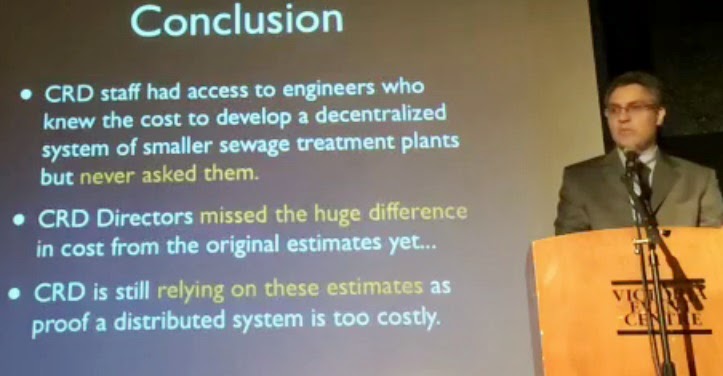 RITE Planner Richard made a great presentation at the Victoria Events
Centre debate. It was broadcast live on internet.

CRD Director Derman talks about waste to energy systems and CRD's staff limiting of options by referencing specific technology in their reports:

To watch, follow the link and click on 6. Integrated Solid Waste and Resource Management Plan - Stage 2 Update (ERM 14-12) to hear Derman speak and then listen to Chair Nils Jensen forget some of the lessons of the past raised by Derman.
--------------------

Bruce is the spokesperson for the Victoria Chamber of Commerce.

CVRD Director Gerry Giles was on CFAX yesterday to talk about the composting issues in Cobble Hill.

Cobble Hill (aka Fisher Rd) is the planned destination for Saanich's kitchen scraps.
-----------------
Garrison on CFAX, brief clip on sewage

MP Randall Garrison was on CFAX for an hour 4 April with Terry Moore and there was a brief sewage conversation:http://theriteplan.ca/media/140404_CFAX_Randall_Garrison.m4a
------------------
Lisa Helps on CFAX 4 April

Lisa Helps was on CFAX 1070 with Terry Moore, with a "bring it on" attitude to sewage questions and knocked it out of the park:http://theriteplan.ca/media/140404_CFAX_Lisa_Helps.m4aSewage talk begins at 5m27s but I recommend listening from the start to hear her common sense approach to local issues.This is so refreshing.
----------------
News stories:

Sewage treatment plan options need an independent assessment. What are the odds?

Mr. Sweetnam and Director Young made a case for why the CRD’s secondary treatment plan must proceed without delay and why a distributed tertiary system (a.k.a. the RITE Plan) isn’t viable. Mr. Atwell advocated for the tertiary option and pointed out the shortcomings of the CRD’s proposal. Director Derman maintained that due diligence had not been done in determining the best approach for sewage treatment.

The Capital Regional District’s plan to build a sewage treatment plant at McLoughlin Point faces a major hurdle Monday as Esquimalt councillors sit to decide whether to rezone the site.

The decision follows a round of public hearings that stretched over four sessions in February and March.

Councillors heard about 117 presentations during the sessions, though some people spoke more than once. Of those, only one clearly supported the bylaw and one felt that the township had an obligation to support the bylaw, according to Bill Brown, Esquimalt director of developmental services.

Esquimalt Mayor Barb Desjardins said now that the hearing has closed her council should be able to make a decision.

“I think we’ve got all the information. The public hearing has closed,” Desjardins said. “There didn’t seem to be anything further that council requested, so the report will come forward and we will deliberate.”

Desjardins acknowledged that Monday could be a long night. Council is also scheduled to receive public input on the township’s annual budget.

The CRD has been seeking to locate a $230-million sewage treatment plant at the site of a former oil tank farm at McLoughlin Point for more than a year. The site is zoned to allow wastewater treatment, but the CRD is seeking encroachments — a maximum of four per cent — into a 7.5-metre shoreline buffer and to increase the allowable height. The CRD first submitted a rezoning application to Esquimalt in January 2013.

After public hearings in July, the municipality passed an alternative rezoning bylaw and began working with CRD staff to develop an amenity package to compensate for hosting the plant.

As a result of the negotiations, Esquimalt is now being offered about $13 million in amenities should the siting at McLoughlin Point be approved, including oceanfront walkways, a million-dollar bike and path system on Lyall Street, public art, bike lanes, road improvements and $55,000 a year for at least five years.

“If Esquimalt decides not to rezone the site or postpones the decision, I think the reality is we will have to seek some way of resolving the issue if we come to an impasse,” said Young, who is also a Victoria councillor.

A rejection by Esquimalt would leave the CRD with two options: ask the provincial government to overrule the municipality’s decision, or issue a new request for proposals to build a plant that would stay within the permitted footprint.

Young said it would be difficult to build within the footprint and keep costs within budget, and said it’s in Esquimalt’s interests — and those of other capital region municipalities — to keep the costs of sewage treatment down.

Young noted that a lot of the people who spoke in opposition were not addressing the specifics of the application but speaking generally in opposition to sewage treatment or to the type of treatment proposed.

“A lot of the discussion [at the public hearing] was about whether we should have sewage treatment and so forth, or the form of sewage treatment. The site in Esquimalt is zoned for a major plant,” Young said. 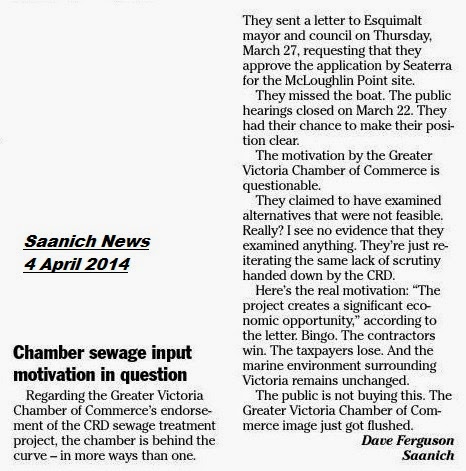