It was another fine day at Ogden Point. Thanks for all the public support & thanks to today's troops - Ritual Russ, Major Tom, Marvelous Marsha & Busy Beth! Until next time . . . keep the faith! 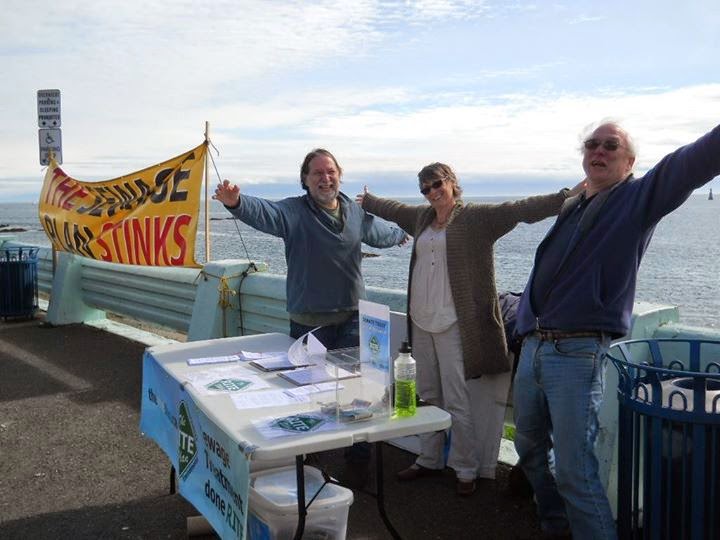 Here's the saved recording of the council proceedings that we streamed tonight:

Esquimalt Chamber of Commerce on CFAX

Doug Stroud, President of the Esquimalt Chamber of Commerce and Bill Lang (former owner of Princess Mary Restaurant) came on CFAX with Terry Moore on Monday to talk sewage and lend their support for a re-think of the sewage plan:

The Mayor of Esquimalt, Barb Desjardins was on CFAX with Ian Jessop at1pm to report on the reasoning behind last night's council decision and to give her perspective on the sewage project and the way forward:
http://theriteplan.ca/media/140408_CFAX_Barb_Desjardins.m4a
This is leadership. Inspiring!


What I witnessed at the CRD today (and I set a new record for parking fees in one day) was just more of the same yet it was still stunning for me to witness...

A group of project weary, stubborn and sometimes even callous individuals sitting in our regional ivory tower who have completely lost touch with the public and what little process existed to involve the public.

They couldn't even wait one week to allow the public to have their say on a staff report that was delivered at the last minute. The same report that recommended the action to ask the Province to invoke the Section 37 "hammer" in the Environmental Management Act.

Look what they missed in their haste: NO means NO. http://youtu.be/M_8Giviu8MA

Here's the CTV version of the CRD's "vote of desperation": http://youtu.be/YK5IMblxqF4

Which CRD staff are providing the advice? The same ones that told the directors to purchase Viewfield Rd. against all common sense. Scary. Brownoff has taken the baton from Young who took it from Leonard and has fallen back to the fear of having to pay 100% of the costs.
-----------------
Blackwell on CFAX

Last week the Chamber of Commerce of Greater Victoria sent a letter to Esquimalt Council encouraging it to move forward on the decision because of rising costs to taxpayers.

Speaking earlier with CFAX 1070's Terry Moore, President of the Esquimalt Chamber of Commerce, Doug Stroud says that is not the sentiment in Esquimalt.

"The majority of folks inside Esquimalt are not buying what is being sold. That is the crux of the matter.  So, that in itself from my opinion is a really good indicator that something is busted with respect to the approach, or how the story is being sold."

If Esquimalt votes "no" tonight, the CRD is expected to ask the Province to step in and overrule Esquimalt and approve the rezoning.

Esquimalt councillors didn’t just turn down the Capital Regional District’s requested rezoning for a sewage treatment plant at McLoughlin Point Monday, they rubbed the CRD’s nose in it.

Not only did councillors unanimously reject height and buffer zone encroachments necessary to build the plant, they asked township staff to prepare a zoning amendment that would prohibit a sewage treatment plant from being built at McLoughlin.

“We have faced Goliath before. We are doing it again,” Mayor Barb Desjardins told a chamber filled with about 50 people.

“For me the answer is: ‘No.’ One more time just so it is very clear, because the CRD has trouble accepting answers from this community. The answer is: ‘No,’ ” said Coun. Tim Morrison.

Councillors received a standing ovation when they officially rejected the CRD’s application.

The decisions leave the CRD in a tough spot said Victoria Coun. Geoff Young, who chairs the CRD’s core area liquid waste management committee. “We’re caught between the requirement that we carry out sewage treatment — a requirement imposed by both the federal and provincial government — and the unwillingness of Esquimalt to host a treatment plant,” said Young.

Asked whether the CRD would ask the province to intervene, Young said that will be up to CRD directors who will discuss the decision this week.

Young conceded McLoughlin would be a tight fit for the plant but said: “Our engineers and advisers have suggested this is the best site we have. We’ve done enough looking and I really don’t think we’re going to find a better one.”

The CRD has been seeking to locate a $230-million sewage treatment plant at the site of a former oil tank farm at McLoughlin Point for more than a year. The site is zoned to allow wastewater treatment, but the CRD is seeking encroachments — a maximum of four per cent — into a 7.5-metre shoreline buffer and to increase the allowable height.

After public hearings in July, the municipality passed an alternative rezoning bylaw and began working with CRD staff to develop an amenity package to compensate for hosting the plant. Esquimalt was offered about $13 million in amenities, including oceanfront walkways, a million-dollar bike and path system on Lyall Street, public art, bike lanes, road improvements and $55,000 a year for at least five years.

But several councillors dismissed the suggestion that the amenities total $13 million.

Coun. Meagan Brame said Esquimalt shouldn’t be held ransom for mistakes make by the CRD. “They asked for these setbacks so they could fit the project into the site. Is it Esquimalt’s fault that the CRD bought a piece of property that does not suit its needs?”

An Esquimalt staff report noted that selection of any option other than approval means the province could be asked to intervene and there would be no guarantee the amenity package survives. 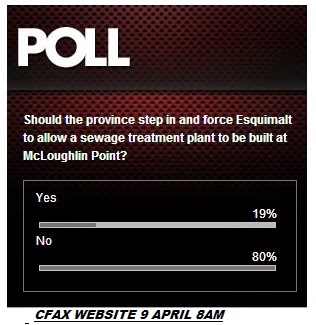 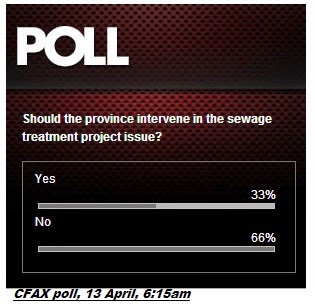 Esquimalt council was met with a standing ovation Monday night when it not only rejected – but unanimously slammed the door on future proposals – for a sewage treatment plant on its shoreline.

The decision has ramifications not only for the timeline and cost of the Capital Regional District's $783-million project, but for the region's autonomy: The provincial government now has the authority to intervene and force rezoning at McLoughlin Point.

The Capital Regional District will ask the province to set aside Esquimalt’s bylaws so the CRD can build a sewage treatment plant at McLoughlin Point.

“Certainly, we will review whatever request they forward to us, but I am not inclined to intervene in what is, ultimately, a decision that should be made by local governments,” Polak said.

Polak said she has already offered to extend the provincial deadline, if needed. But she noted there is a federal requirement to begin treating sewage by 2020.

“They are obligated to find a way to comply with that,” she said. “That is a decision for the local government. They need to determine how they are going to meet that obligation.

“No provincial government should take lightly the idea of interfering when it comes to something that is legitimately within the bounds of a local government.”

A two-part resolution passed by CRD directors Wednesday asked for the province to intervene and, if it refused, to offer direction on how to proceed.

But Esquimalt’s decision left the CRD in a bind. Under provincial order to build sewage treatment, about $9.6 million has already been invested in the McLoughlin Point, which is considered the best site for a plant.

Some CRD directors, including Esquimalt Mayor Barb Desjardins, argued the decision on whether to go to the province should be postponed to give the public a chance to weigh in. She said it was clear from Esquimalt’s public hearing into the rezoning that there is regional opposition to the sewage plan.

“Please understand this is your public that spoke. Don’t make a bad decision here,” she told directors.

But the motion to postpone failed both at committee and later in the day at the CRD board levels.

Victoria Coun. Marianne Alto recommended that rather than asking the province to set aside Esquimalt’s bylaws, the board should instead ask the province for recommendations on what to do next. After all, she said, the province created this situation by ordering sewage treatment.

“The province has dictated this years ago and given us very prescriptive rules which we have tried very hard to follow and we are now at an impasse,” Alto said. “I think it’s time now to go back to the province with an open-ended question. We agree with you. We need sewage treatment. We have tried everything we can imagine. We’re not there. What do we do now? Over to you guys. Tell us what to do now. We’ll do it.”

But with delays estimated to be adding $1 million a month to the cost of the project and the clock ticking on completion, directors felt they had no other option.

Victoria Coun. Ben Isitt said the dance with Esquimalt over McLoughlin has gone on too long.

“If we look at McLoughlin Point, it’s buffered from the residential areas of Esquimalt by federal land. It has the appropriate zoning. It’s former industrial lands and that’s why this committee purchased that parcel,” Isitt said.

NDP MLA Maurine Karagianis, who represents Esquimalt-Royal Roads, said she agrees with Polak and would “vociferously oppose” any attempt by the provincial government to overrule Esquimalt.

“The municipalities have a right to make their own decisions on zoning,” she said. “Really, this is back to the CRD to sort out their situation, and I stand by Esquimalt’s decision to re-zone the property and to make that determination and for the province to stay out of it at this point.”

Karagianis said the CRD needs to “go back to the drawing board” and either have more discussions with Esquimalt or look for other sites.

A tsunami of victim language engulfed the CRD’s deliberations on how to respond to Esquimalt Council’s  April 7th rejection of its sewage treatment facility application. Director Rice started with “..the fact that we’re here, the whole process was put in motion by the provincial government”. Director Blackwell followed with “It’s unfortunate that we’ve come to this place. But I do believe that we need to take this to the province who ordered us to take this on in the first place. The last time we spoke to the minister she said the plan was the plan”.

A bit later, Director Alto referred to the  province as “..the folks who have placed us in this position.” Chair Young’s contribution to victimhood was that “..I think the least bad option open to us is in front of us.”  That option was to try to get the province to force Esquimalt to accept its application.

Let’s get together on tertiary treatment (Klassen):
http://www.timescolonist.com/opinion/letters/let-s-get-together-on-tertiary-treatment-1.949154 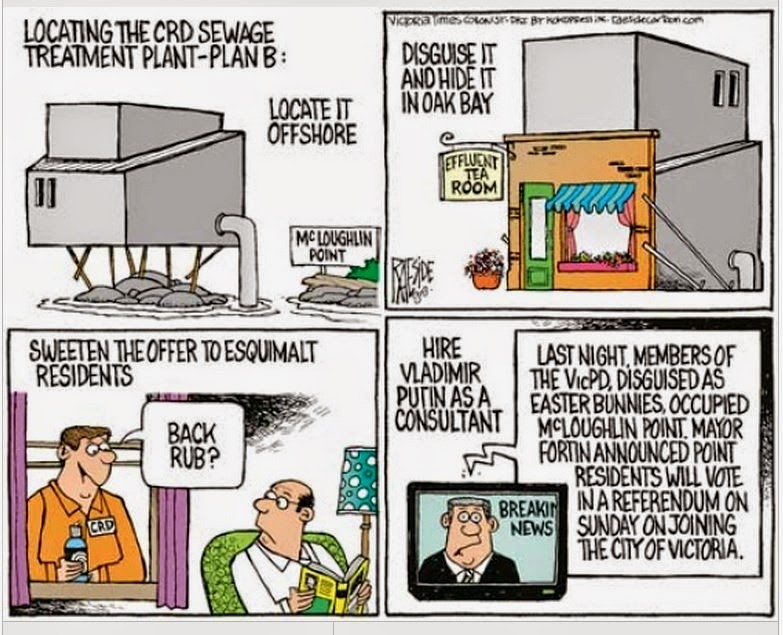