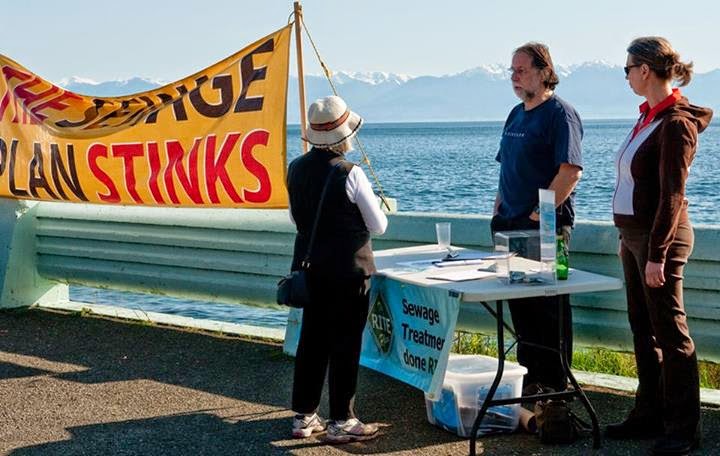 
SEND IN YOUR LETTERS!

Mayor Barb Desjardins was on CFAX 1070 this morning with Al Ferraby correcting some of the misinformation out there and highlighting the opportunities that exist to remedy the sewage situation:

.MLA Rob Fleming was on CFAX 1070 with Al Ferraby this morning:

1) Rob doesn't seem to be aware that the CRD sewage committee is stacked with directors from Victoria and Saanich. It is NOT a democratic body.

2) The word fine is not mentioned in Bryson's letter...

...and any fines under the Fisheries Act are already in place today. I'm going to chock this up to scare mongering, the same that we routinely hear from Young and Blackwell and Brownoff.

3) Esquimalt DID NOT offer up McLoughlin point for a large centralized plant. To say otherwise is factually incorrect.

Does Rob know there were almost 3 years beyond the planned end of construction before hitting the Dec 31, 2020 deadline?

4) Esquimalt council did not base its decision on the coming election. The rezoning application didn't meet the standards set out by the community and its legally binding bylaws.

5) Rob misses that far more people contributed input than those who spoke at the hearings. Many emails and written correspondence was received by council.

During that entire clip there wasn't a single criticism of the CRD but plenty heaped on Esquimalt and its council. That's not very MLA like and it was somewhat of a repeat of what we heard Monday night when Maurine Karagianis came on CFAX before the decision.

If Rob had taken an interest in the hearings and had not hit the air with what appears to me to be someone else's speaking notes, we might have heard something new.
--------------------

Watch Ben Isitt from 27m50s insist that McLoughlin Pt is the only option.


Isitt's retells a story of how went swimming in the polluted waters off James Bay this winter.

Isitt still thinks that sewage is flowing onto the beaches. Well, it certainly does when it rains but not from the normal functioning of the sewage system. That why the deep marine outfalls were constructed.

The fiercest opposition to the Capital Regional District’s proposed sewage-treatment plant has also been the least constructive.

In a matter of months, the so-called debate from the opponents shifted from not needing sewage treatment at all to demanding higher levels of treatment. The fate of the treatment plant then rested on whether or not Esquimalt council would allow minimal encroachments to the shoreline buffer and allowable building height at McLoughlin Point. 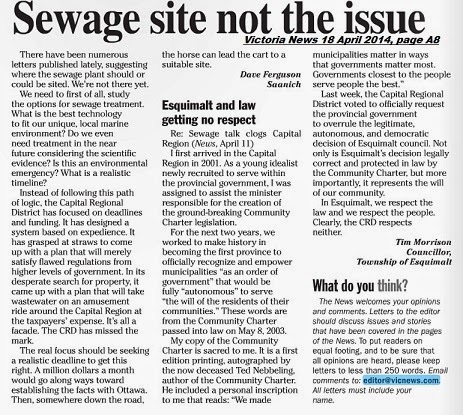 SEND IN YOUR LETTERS!- CLICK HERE TO SEND LETTER TO TIMES COLONIST
- Click here to send letters to VICTORIA NEWS