Sign petition to demand review of CRD sewage plan
The communities have created a petition that we are sponsoring:http://sewagepetition.ca/Every signature will be presented in the Legislature by local MLAs.
----------------- 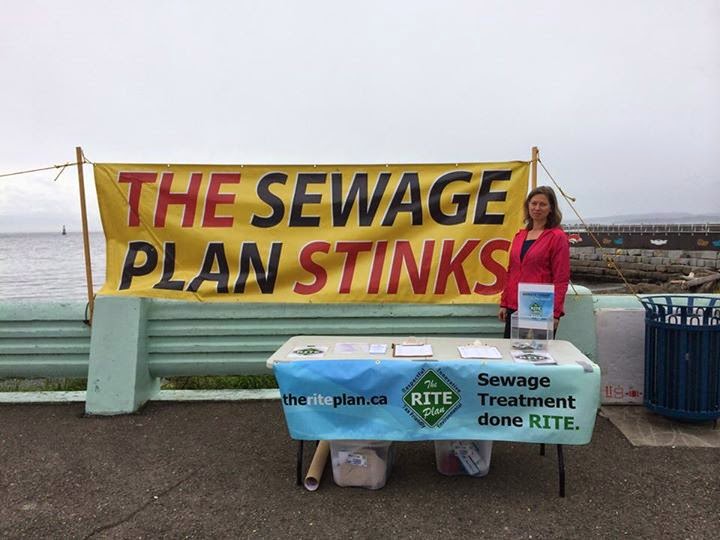 RITE Plan's Youtube Channel
Frequently updated with the most vital and interesting snippets that show the best and the worst of the CRD's sewage planning process
http://www.youtube.com/user/theriteplan

As an elected official, I certainly appreciate the necessity of sometimes having to make a difficult and unpopular decision and then mustering the resolve to see it through.

At one point in the past, this might have been the situation faced by the Capital Regional District board regarding the sewage treatment plan for the region. However, a recent change in the circumstances of the current plan for sewage treatment leaves the CRD in a limbo it refuses to acknowledge. As the CRD continues to push on with this mindset of resolve, the impact is now one of recklessness and missed opportunities.

Consider two different responses to Esquimalt’s decision not to rezone McLoughlin Point as per the application of the CRD. The City of Victoria acted prudently and suspended indefinitely the further allocation of any resources to the CRD’s Clover Point rezoning application to pump wastewater to the now on-hold McLoughlin Point facility.

In sharp contrast, CRD is continuing to spend money on a plan that has been rejected for the zoning of its major component. In one week, the CRD will be embarking on a series of open-house sessions for a conveyance line from McLoughlin Point to the Hartland landfill. Yet the reality is the Township of Esquimalt recently rejected the CRD’s request for the rezoning of McLoughlin Point for sewage treatment. Why would the CRD continue to push on full steam ahead when it does not have a clear plan?

Such spending is reckless. It’s this same reckless mindset that released the request for proposals for McLoughlin Point three days before the public hearings last July and the subsequent rezoning decision by Esquimalt council. It is the same mindset that informed the purchase of the Viewfield site for a biosolids plant. And it’s the same mindset that will spend thousands of dollars on open houses regarding the proposed pipeline from McLoughlin Point to Hartland.

Pause. Halt. Stop the spending of the region’s residents’ money until we have a better plan.

Much more worrisome than this heedless continuing expenditure of resources are the opportunities that this mindset is blind to. Within 48 hours of the “threat” posed by Esquimalt’s decision, the CRD requested the province to step in, despite all indications that the minister would prefer the region to sort this out on our own. Entirely overlooked is the clear opportunity within the next short time for the CRD to do a review of the decentralized model with fresh eyes, new cost and model analysis. What would be the down-side?

To sort this out on our own will take change: Change in mindset from CRD directors, staff and even consultants. The CRD continues to use the same threats to push this forward: a loss of funding and the monthly cost of a delay.

We have been reassured several times that funding is in place and given that the operational costs for the plant are currently estimated to be about a million dollars a month, every month we don’t spend on this project we’re actually saving money. This fact is not mentioned by the CRD.

The people of the region deserve the best and most current technologies as we move toward land-based sewage treatment. There are decisions being made around the world to reduce the risk of centralized sewage plants and to move toward a decentralized model for sewage treatment. The ability for each municipality to benefit from the heat and the resource recovery locally, to place their facility where it provides the best benefits for their own residents is an opportunity we should not lose in the region.

The CRD’s own study showed the Douglas Street corridor as a most opportune area for benefit. Uptown and the university area showed as areas that would benefit. Colwood has already determined its opportunities and other municipalities should follow its lead.

At the CRD, we have made use of and continue to use consultants for the current centralized system configuration. These same consultants have done amazing work elsewhere in North America in designing and building decentralized wastewater facilities. We should be using that expertise for our project, moving toward a decentralized model, for the future of the region, and for best environmental, social and economic benefit.

- Barbara Desjardins is mayor of the Township of Esquimalt.

-----------------
The construction industry gets vocal:http://www.timescolonist.com/opinion/op-ed/comment-province-must-act-on-sewage-treatment-project-1.983847"The new risks are that the project does not proceed and the tens of millions of dollars invested to date are wasted, funding gets reallocated and, most important, the opportunity for much-needed jobs and future growth in the capital region is lost. This must not be allowed to occur."- No evidence of that. All promises have been secured."The Seaterra program provides an environmental and economic solution."- This project is a waste of money. We need one worth paying for."One more thing — if there was ever an example or a need for a business case to support local-government amalgamation in the capital region, this would be it."Before that business case, how about one for the Seaterra project?A google Search on VICA revealed the close ties with Seaterra and their PR firm:http://www.vicabc.ca/Documents/Media_Release/Media_Release_CRD_Nov_15_2013.pdf
---------------
Sewage foes' survey skewed, says Seaterra director

“I made a firm commitment that we will correct any misinformation that’s out there in the media,” said Seaterra program director Albert Sweetnam of the telephone poll. “This is complete misinformation, so I thought it needed to be addressed.”   Photograph By DARREN STONE, Times Colonist

A poll conducted by opponents of the Capital Regional District’s sewage treatment plan is misleading and will produce skewed results, say officials with Seaterra, the civilian body overseeing the $783-million megaproject.

Seaterra said the automated telephone poll contained loaded questions that were misleading and emotionally charged and will lead to an inaccurate portrayal of public opinion.

“I made a firm commitment that we will correct any misinformation that’s out there in the media,” said Seaterra program director Albert Sweetnam. “This is complete misinformation, so I thought it needed to be addressed.”

But a representative from the citizen’s group that commissioned the poll, the Sewage Treatment Action Group, said Seaterra should wait for the results before making judgments.

“They were anticipating the results of a survey we had done, which we hadn’t published yet,” said STAG’s Richard Atwell, who plans to release the results on Monday.

Seaterra said the automated calls included a statement such as: “We were calling to ask your opinion on your concerns about the CRD’s sewage project that will continue to flush toxic chemicals and pharmaceuticals into the ocean, even after secondary treatment. Are you concerned, yes or no?”

The statement misrepresents the concern about trace chemical contaminants in effluent from secondary treatment, which are lower than in household dust, Sweetnam said.

The survey also doesn’t give respondents a chance to answer no, he said. “If you punch the button for no it shuts you off. That’s not the way a poll is done.”

The CRD has asked the province to intervene after Esquimalt council rejected the CRD’s bid to rezone a former oil tank farm at McLoughlin Point for a $230-million sewage treatment plant. The site is zoned to allow wastewater treatment, but the CRD was seeking encroachments into a shoreline buffer and to increase the allowable height.

The rejection came after an extended public hearing that included more than 100 presentations — only two of which were in favour of the plan.

Some observers have been critical of the hearing process, which allowed broader comments about the need for sewage treatment and for alternative methods of treatment.

Victoria Coun. Geoff Young, chairman of the CRD’s liquid waste management committee, said Seaterra, which is supposed to be building the project, has been forced to address those broader arguments.

“Seaterra itself, which has been charged with the responsibility of delivering the program, is finding its ability to do that is being affected very markedly by the discussions about the rezoning, which have been expanded to include a lot of these other discussions,” Young said.

Despite all of the arguments around the Victoria sewage plan, the small size of McLoughlin Point remains a major clog.

No matter how the Capital Regional District attempts to market it; the small, low-lying lot at McLoughin Point is unsuitable to safely house such a large, centralized sewage plant.

The CRD rezoning application requested approval for a building with zero setback on all of the lot’s land boundaries and only a one and a half metre setback on sections of the waterfront.

This request is in stark contrast to the provincial government’s own waterfront setback recommendation of a minimum of 15 metres. In addition, the low lying lot is in a tsunami zone requiring a high protective wall that could endanger sea life and migratory birds. The seawall elevation also requires the sewage structure to exceed current harbour height restrictions.

These facts should not surprise the CRD, since a 2009 report prepared for them considered McLoughlin Point unsuitable and too small. Poor CRD planning and a too small a lot is to blame for the escalating costs of the sewage project.

The two letters resonate with anyone who is concerned about our impact on the Earth’s environment. I believe that many of us are prepared to go the extra mile to make a difference and also recognize that we will need to pay to clean up after ourselves.

One writer comments on the opaque process used by the Capital Regional District to resolve the sewage problem in Greater Victoria. I’m not an expert, but I know there are new technologies that have merit and need to be looked at, with no hidden agendas at play. I live in Dockside Green, a community that treats its own sewage. The knowledge and expertise are out there, but they are not sincerely being accessed.

The other writer laments the difficulty in recycling Styrofoam, especially for the individual consumer. Again at Dockside, we pay to have bags of Styrofoam picked up when our compost is collected by a local resource-recovery business.

It is hard to believe that a program where consumers are able to drop off Styrofoam in bins in the parking lots of grocery stores, for example, would not be workable. We need to make it easy for people to recycle.